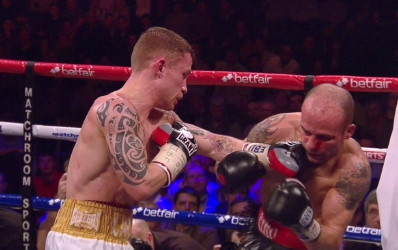 By Scott Gilfoid: Undefeated #2 IBF, #2 WBC, #10 WBO, Carl Frampton (17-0, 12 KO’s) says he wants WBC super bantamweight champion Leo Santa Cruz (26-0-1, 15 KO’s) and he expects to be able to get a fight against him in the next 4-5 months. Frampton fancies himself to be up to the task of beating Santa Cruz, as he thinks his style is beatable for him.

“We’re going after Leo Santa Cruz now, and I think the fight can be realistically made,” Frampton said to Sky Sports. “I think I can get Santa Cruz in 4-5 months.”

It looks like Frampton’s 9th round TKO win over Kiko Martinez last year in February planted some ideas in his head, because Frampton is seeing himself as being capable of beating the arguably far superior Santa Cruz. Frampton was getting beaten by Martinez until he caught him with a lucky shot in the 9th round to stop him.

If not for that punch, Frampton would have likely been either knocked out out beaten on points. Martinez was too strong for him and was getting the better of Frampton with every exchange they had, which is why Frampton was running so much. He pretty much had no other choice but to run from Martinez because of he tried to beat him in a straight up toe-to-toe fight he would have been blasted out quickly by Martinez.

Santa Cruz has a fight coming up on March 8th against Cristian Mijares (49-7-2, 24 KO’s) on the Saul “Canelo” Alvarez vs. Alfredo Angulo pay-per-view card on Showtime at the MGM Grand, in Las Vegas, Nevada, USA. This will be light work for Santa Cruz, and a good tune-up fight for him to be ready to take on Frampton if the fight can be made. Actually, Mijares is nothing like Frampton at all, but it’s still a good stay busy fight for Santa Cruz just to get some rounds in before he can meet up with Frampton.

Frampton would likely try and fight Santa Cruz the same way he did against Kiko by running around the ring and stinking up the joint. I can’t see Frampton winning too many rounds with that kind of style in the U.S., but at least he’ll be able to stay on his feet for as long as he’s in motion. The moment Frampton stops and tries to have a last stand, it’ll be over quickly with Santa Cruz bludgeoning him into the canvas.