Mayweather: Oscar will try to give Canelo the blueprint, but he’ll lose 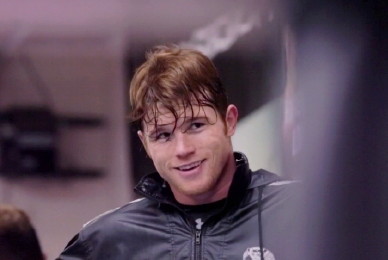 By Dan Ambrose: Floyd Mayweather Jr. (44-0, 26 KO’s) thinks it’s funny how Golden Boy Promotions president Oscar De La Hoya keeps giving the so-called blueprint in how to beat him to all of his Golden Boy fighters, and they keep getting beaten one by one.

The latest one that Oscar is giving the blueprint to is the light heavyweight-sized WBA/WBC junior middleweight champion Saul “Canelo” Alvarez (42-0-1, 30 KO’s), and Mayweather Jr. sees him losing as well.

The whole thing with the blueprint started with De La Hoya’s loss to Mayweather Jr. in 2007. De La Hoya was past his prime when they fought, and Mayweather Jr. seemed to carry De La Hoya by not fighting really hard for the first 6 rounds of the fight. De La Hoya could only jab because he was unable to land any of his power shots due to the quickness of Mayweather.

Some of the judges gave De La Hoya many of the early rounds even though Mayweather Jr. was clearly landing the cleaner shots. In the second half of the fight, Mayweather Jr. appeared to get serious with De La Hoya and ended up dominating him in the last 6 rounds. As such, the blueprint that De La Hoya is taking about is really just an illusion because Mayweather Jr. looked like he was taking it easy on him due to his advanced age at the time.

De La Hoya is actually hurting his fighters by giving them stupid advice about jabbing Mayweather, because that’s not going to help Canelo or any of De La Hoya’s other Golden Boy fighters beat Mayweather.

Jabbing won’t help Canelo beat Mayweather because the red-haired Mexican fighter is too heavy, too stiff and too slow for it to be any use. If Canelo just jabs and blindly follows De La Hoya’s simple blueprint, then he’s going to get badly dominated by Mayweather. The only thing that Canelo can do to win this fight is to charge Mayweather Jr. like a mad bull to try and use his 20+ pound weight advantage over him. Being over 170 could help Canelo against the much lighter Mayweather Jr. if he’s able to corner him and force him to fight his way out of a tight spot.