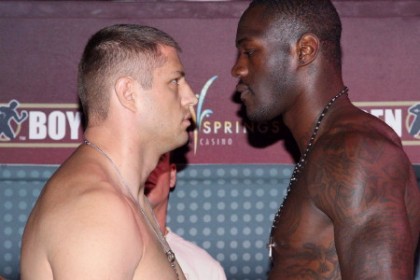 (Photo credit: Tom Casino/Showtime) By Thomas Cowan: Unbeaten American heavyweight Deontay Wilder (28-0, 28 KO’s) will be facing former WBO champion Siarhei Liakovich tonight in Indio, California. Wilder was going to fight Dereck Chisora in July, but that fell through because Wilder is not currently allowed to travel outside the States for legal reasons. Wilder said he would be facing a Russian heavyweight who was “much better than Chisora”. As it turned out, neither of these statements were true.

Liakovich is not from Russia, he’s from Belarus. Obviously, this doesn’t make him a bad opponent, I just wouldn’t let Deontay book his own flights if he’s flying to Europe anytime soon. The main disappointment though, is that Liakovich isn’t a good opponent.

Wilder and Golden Boy can dress this up anyway they want, but the fact is Wilder is fighting his 29th fight against a fighter Robert Helenius stopped in his 16th fight and Bryant Jennings stopped in his 13th fight. Liakovich is better than Audley Harrison, who Wilder fought in his last fight, but that’s really the only good thing you can say. If you want to know how well Audley Harrison prepares you for a decent heavyweight, watch David Price’s fights with Tony Thompson.

Liakovich’s best win in his career came in 2006, capturing the WBO title in a decision win over Lamont Brewster. However, in his first defence, Liakovich was knocked out in the 12th round by Shannon Briggs. In his next fight, he lost every single round against Nikolay Valuev. Since then, he’s stopped journeyman Jeremy Bates in one round and then stopped Evans Quinn in the 9th round, a fighter who didn’t get out of the first round with Seth Mitchell. As I’ve mentioned, in his last two fights he’s been stopped by Helenius and Jennings.

Wilder will knock Liakovich out quicker than the 9 rounds it took Helenius and Jennings, there’s no doubt about that. Wilder’s 28 fights have established that he’s extremely capable of giving out punishment. We need to see him fight someone that can soak it up and give it back. I think Chisora would have been a great opponent and if Wilder could knock him out, that would send a real message.

Until he steps up and proves himself, a lot of fans will continue to have serious doubts about Wilder. His jab looks poor and his chin has looked vulnerable, particularly when he was dropped by Harold Sconiers. Wilder’s right hand power seems to his only weapon and if you compare the effect his punches had on Audley Harrison, to the effect David Price’s punches had on Harrison, I still have doubts about his supposedly monstrous power.

If Wilder gets past Liakovich, there are are strong rumours that he’ll be facing the Seth Mitchell vs Chris Arreola winner. I think this would be an excellent fight for Wilder. I expect Arreola to beat Seth Mitchell easily because he punches much harder than Johnathan Banks, who destroyed Mitchell in two rounds. Mitchell beat Banks in a rematch, but Banks looked awful and reportedly broke both hands during the fight.

Arreola is not a great fighter and he would not “destroy David Haye” as Scott Gilfoid claimed, losses to Bermane Stiverne and Tomasz Adamek clearly show his limitations. However, he would be an excellent test of Wilder’s power and chin because he can punch and he’s very tough, as he showed by fighting with a broken nose for 9 rounds against Stiverne. I don’t believe the Wilder-Arreola fight will get made, but if it does it will be a good step up for Wilder. First, he has to make sure he doesn’t slip up tonight.