Fury to Haye: You’re going to swallow your teeth 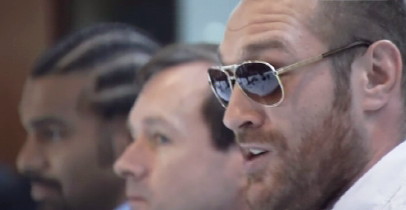 By Scott Gilfoid: Unbeaten Tyson Fury (21-0, 15 KO’s) is promising to give David Haye (26-2, 24 KO’s) a real beating on September 28th when they face each other at the Manchester Arena in Manchester, England, and Fury sees Haye possibly swallowing some teeth in the process of getting knocked out.

Fury flat out told Haye what his plan is to try and beat him in this fight by going straight at him from round 1 and turning the fight into a war. Haye remains skeptical that Fury will do that, as he sees him doing the opposite of whatever he says he’ll do. I’m not so certain that Fury has any other way of fighting but to go to war with Haye.

I mean, have you ever seen Fury out-box anyone? I haven’t. He has a terrible jab and he stands at medium or close range to his opponents and outworks them with slapping shots. It’s never pretty, but it’s been effective against the poor opposition Fury’s been facing during his four year pro career.

Fury said to Sky Ringside “You’re going to swallow your teeth against me, guy…I’m going to chop him off and rip his body to bits…I’m going to lean all over him…he can run but he can’t hide…If you’re in front of me you’re in trouble…I’m going to grind him down until he acts like he did against [Carl] Thompson. If he did it once he’ll always do it again.”

Well, if Fury fights anything like he did in his two fights against John McDermott and his recent fight against Steve Cunningham, he needn’t worry about taking Haye deep, because he won’t last long enough to get Haye to that point.

Cunningham and McDermott couldn’t miss Fury with their right hands. I think they’d have hit Fury even with their eyes closed because seemed incapable of blocking or getting out of the way of any right hand shots from those guys. Against Haye, Fury is going to be getting hit an awful lot, especially if he’s serious about wanting to go directly after him.

Reynoso: It’s time for Canelo to step up and be a legend; Mayweather’s kingship is ending »