Does Canelo lack the body type to beat Mayweather? 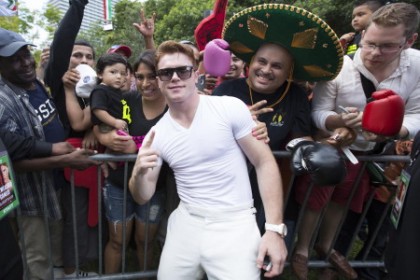 (Photo credit: Esther Lin/Showtime) By Dan Ambrose: If you look at Saul “Canelo” Alvarez’s body shape, it doesn’t look like the body of a fighter that is capable of beating a super star like Floyd Mayweather Jr. (44-0, 26 KO’s). Canelo has more of a wrestler’s type of a body with his short limbs and heavy muscles that prevent fast movements.

Canelo looks like a little tank with red hair and it’s impossible to picture him beating an athlete with blazing fast hand and foot speed like Mayweather Jr. Canelo looks more like a cross between Juan Manuel Marquez, Julio Cesar Chavez Jr. and Arthur Abraham with his body shape, movement and skills.

Canelo is really heavy-bodied for his height and that’s going to make it really tough on him in the future when he’s forced to move up to middleweight when he can no longer fight at 154. This could be about as good as it gets for Canelo; unless he is able to pull up welterweights to the middleweight division to fight them once he makes the move.

Canelo’s heavy body is going to be a real trap for him when he gets in the ring with Mayweather Jr. on September 14th, because Canelo will be like a bigger version of Marquez, but with the weight of a Chavez Jr. and the punch output of an Arthur Abraham.

Canelo has a bit of each of these fighters, and it comes together in a combination that won’t be a good one for him when he faces Floyd. That kind of body type would work against a fighter that wanted to come at him foolishly. Josesito Lopez is the classic example of one of Canelo’s typical opponents he’s faced during his career.

Josesito went straight at the heavier and stronger Canelo making it easy for the red-haired fighter to overwhelm him with his size.
Mayweather Jr. is going to take advantage of Canelo’s slow, sluggish movements by boxing circles around him and hitting him at will with shots.

There won’t be open scoring in the fight, so Mayweather won’t change his fighting style by learning that some of judges are giving rounds to Canelo. Austin Trout made the mistake of changing his fighting style last April after learning that he was well behind in the fight. Trout went from boxing Canelo to going right after him and turning into another typical opponent.

The fact that Canelo had to struggle to win a controversial decision was more from the fact that he simply didn’t throw enough punches because of his poor stamina. If not for that, Canelo might have been able to knock Trout out like he’s done with his other made to order opponents. Mayweather isn’t going to change his fighting style to get in the trenches and fight to Canelo’s body type.