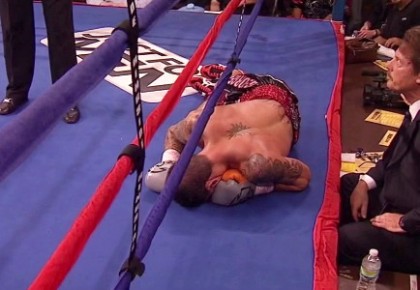 By Dan Ambrose: Former super middleweight contender Don George (24-4-2, 21 KO’s) was manhandled by Caleb Truax (22-1-1, 13 KO’s) in losing by a surprise 6th round KO on Friday night at the Minneapolis Convention Center in Minneapolis, Minnesota.

George stayed flat on his face for a long time after the knockout. Referee Gary Miezwa officially stopped the bout at 2:24 of the round.

After the fight ESPN reported that George hadn’t even very much for the past week in getting down to 160, and it had left him weak. George plans on moving back up to 168 where he had previously been fighting.

George recently moved down to 160 following a 12th round TKO loss to Adonis Stevenson last October, and he clearly doesn’t belong at this weight. I was thinking to myself that George looked too thin for 160 when he came out in the 1st round against Truax, and sure enough I was right.

George’s power wasn’t there and he was immediately hurt by a series of hard right hands from Truax. George was in serious trouble along the ropes as the round ended.

In the 6th, Truax caught George with a perfect right hand that sent George backing up to the ropes. Instead of clinching Truax like he should have, George motioned for him to keep throwing punches. In hindsight, it was no a smart thing to do because he ended up taking a number of hard shots until he was finished off with a right hand.

If George is going to continue fighting, whether at super middleweight or wherever, he’s going to need to learn some defense because he’s so wide open and he doesn’t have a busy enough style and he’s not fast enough to compensate for his poor defense.

In what was the main event of the card, if you want to call this main event, unbeaten super featherweight Rances Barthelemy (19-0, 12 KO’s) stopped Fahsai Sakkreerin (39-4-1, 21 KO’s) by a 2nd round knockout after nailing him with a right to the midsection in the 2nd round. Sakkreerin was too hurt to get up and the fight was halted at 1:26 of the round.

The 5’11” Barthelemy is a decent fighter, but he’s looked pretty awful in other fights and I can’t see him winning a world title. He’s good at beating certain guys, but I think he’s going to get taken apart once he’s thrown in with a real fighter.