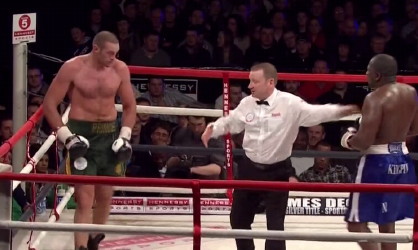 By Bradley Swaine: We all know what happened with heavyweights Tyson Fury and David Price, Tyson gave away his belts to stay away from the 6ft 8 Liverpudlian. Tyson Fury vs David Haye has a feeling of Deja Vu Fury is already coming out with excuses and asking for an 80/20 split this is all part of his plan as he knows he can’t beat David Haye.

What does Seth Mitchell do for Fury, Seth Mitchell now he has beaten banks is highly rated and above tyson fury in most governing bodies including the WBC and judging on Mitchell’s last performance fury won’t need much effort to beat Mitchell.

Mitchell has a shaky chin and limited head movement for Fury it’s a treat against Haye he’s got a slick power puncher with a big right hand and judging on fury being down against Cunningham and Pajkic he won’t be getting up fom a Haye right hand. I think it’s fair to say we probably will see Haye and Fury in a ring together but not for a while.

« Canelo felt like exchanging with Mayweather in face-off in Washington, D.C.

Trejo: I wish Canelo had more experience for Mayweather fight »