Cleverly: I’ll fight Froch at 168 and beat him 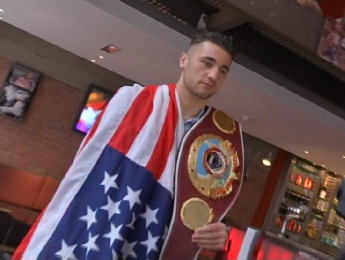 By Scott Gilfoid: WBO light heavyweight champion Nathan Cleverly (28-0, 12 KO’s) says he’s willing to sacrifice weight by moving down in weight 7 pounds to whip IBF/WBA super middleweight champion Carl Froch (31-2, 22 KO’s) if he would only accept the fight so that he could get the job one on the 35-year-old Froch.

Cleverly said to walesonline.co.uk “I know I can beat Froch so I’m more than happy to move down a division to show people what I can do. It would be tough for me to move down, but it’s a sacrifice I’m willing to take.”

I hate to say it but I think Cleverly would beat Froch if that fight were to be made, even if Cleverly was a little weight drained. I still think he’d handle Froch. If Mikkel Kessler was able to almost beat Froch without hardly throwing any punches in that fight, Cleverly would definitely do a job on him.

I hope Cleverly doesn’t hold his breath waiting for Froch to say yes to the fight with him because it’s probably not going to happen. Froch and his promoter Eddie Hearn’s excuse for not fighting Cleverly was that he would have to move up in weight to fight him, whether it be at a catch-weight or at the full 175 lb. weight for the division, and that would give Cleverly an advantage.

With Cleverly now saying he’d come down to fight Froch at 168, there shouldn’t be any more excuses to keep Froch from taking the fight.

I don’t see Froch saying yes to it because Cleverly is just too dangerous for him because he throws a lot of punches and he can take a good shot. Froch can’t throw a lot of punches and if his power has no effect on Cleverly, he’d lose and that’s what I think would happen.

« Price: Lennox has taken me to another level in training for Thompson rematch