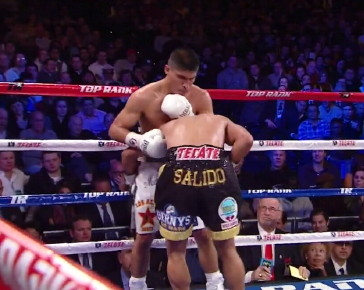 This is a potentially tough fight for the 25-year-old Garcia because he was kind of exposed in his last fight against Orlando Salido last January in which Garcia had started running out of gas by the 4th round and looked like he wanted out of the fight by the 8th.

Luckily for Garcia, he got his way out of the fight when an accidental headbutt broke his nose. Rather than toughing it out like many fighters do when they suffer a broken nose, Garcia complained that he couldn’t breathe out of his nose, which is a fairly common thing for a fight with a broken nose. That’s just how it is, but the fight was stopped anyway.

Lopez, 29, was stopped twice by Orlando Salido, once in 2011 and another time in 2012. However, he’s now won his last two fights against Aldimar Silva Santos and Eugenio Lopez and looked good both times.

For Lopez to win this fight he’s going to have to box Mikey and pick his spots in the early rounds while Mikey still has his power. By the 7th or 8th, Mikey should be starting to gas and that’s when Lopez needs to pore it on and look to take him out.

I noticed that Mikey dishes it out pretty well, but he has almost panicked look on his face when he starts getting hit. Salido had Mikey looked very nervous in the 7th and 8th rounds, and he was holding like crazy to stop the action.

If you watch that fight again you’ll notice that Mikey was holding his left arm way out in front of him and using it to pull Salido’s head down when he would come forward to try and throw punches.

This prevented Salido from getting his shots off, and it was something that Mikey used effectively in the first four rounds until Salido’s head movement got so good that Mikey wasn’t able to shove him like before.

You can’t have a fighter with long arms using their arms to shove their head’s down because then the fight becomes effectively a shoving match where the guy with the best shoving technique wins the fight.

The referee that worked the Salido-Garcia fight should have gave a warning in the first round when he first saw Mikey doing that and then taken points off when it was clear that Mikey was using this as a defensive strategy.

Pushing isn’t allowed in boxing, and that referee really blew it for Salido. Had there been a referee like Jay Nady in there that night, I think Mikey would have lost the fight because he wouldn’t have gotten away with the shoving, and would have taken a lot of punches from Salido.

I see this fight coming down to whether or not Garcia can get away shoving Lopez as he’s coming in. If the referee is asleep at the wheel then Garcia loses, but if he does his job and takes points away for the fouling then Lopez should win this fight.