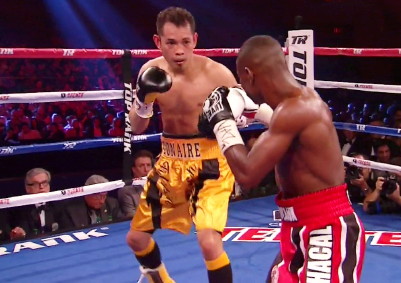 Ward said to RingTV “You can just tell Nonito was looking for one big shot. I think that Nonito could have come in behind his jab, even though he’s not hitting Rigondeaux with it. He should have just tried to touch him as a range finder.”

In watching the fight for a second time you can see that Donaire did attempt to land jabs but it was useless because Rigondeaux moved backwards or leaned back so that the shots missed. When Donaire would attempt to bend forward to throw a long jab, Rigondeaux would block it and come in fast to score hard right hooks and left hands.

Ward’s advice would be good for normal fighters but it wouldn’t have worked for Donaire last night because Rigondeaux would have eaten him alive if he had decided to throw 30 to 40 jabs per round. The shots would have missed, been blocked and resulted in Donaire getting countered repeatedly by Rigondeaux.

Ward was correct that Donaire shouldn’t have been loading up so much but the reason he was doing this is because he’d been knocking everybody out at 122. The division is so weak right now that Donaire was able to blast out the guys that his promoter Bob Arum was liming up for him, and he was putting him in with old fighters recently.

It’s understandable that Donaire would pick up some bad habits from those fights given the quality of opposition he was facing. For that you’ve got to blame his promoter Bob Arum, but he makes matches based on what fight makes the most money, not what’s a good fight that will be a competitive one. Putting Donaire in with good fighters would have likely resulted in him fighting at a higher level last Saturday night, but Arum is more of a money promoter looking to get the best deals for his fighters. Unfortunately the most popular fighters in the weight class were old guy that Donaire was able to knock out easily.