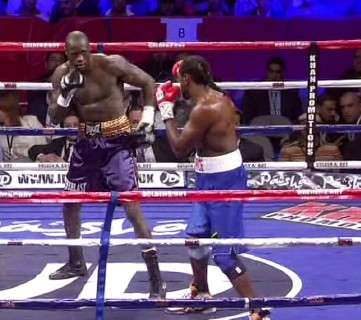 By Scott Gilfoid: Golden Boy Promotions made a stab at trying to line up a fight between unbeaten heavyweight talent Deontay Wilder (28-0, 28 KO’s) and undefeated British/Irish heavyweight Tyson Fury (21-0, 15 KO’s), but Golden Boy struck out after Fury’s promoter said he had other options for the 6’7” Fury.

Golden Boy Promotions CEO Richard Schaefer said to ESPN “[Mick] Hennessy was saying that they [Fury] have other options and this and that and other excuses. They were not all that keen on it. It’s too bad.”

Yes, it is too bad. What a pity. A fight between Fury and the 6’7” Wilder would easily be the biggest fight in Fury’s career and it would be the first time he faced an opponent that could look him dead in the eye in the ring instead of staring up at him three to five inches.

Wilder is just as tall as Fury, but with much, much better power and hand speed. It would be a fight where Fury would be lucky if he made it out of the 1st round because once Wilder opened up with a flurry of shots like he did with his last opponent Audley Harrison last Saturday night, we’d likely see Fury get drilled out in record fashion. It would be like watching a replay of Andre Golota vs. Lennox Lewis.

I think perhaps the only British heavyweight that Wilder might possibly get to agree to face him is Dereck Chisora, and even with him, I seriously doubt he’d agree to take the fight. But with Chisora having lost three out of his last four fights, it’s hardly worth it for Deontay to face him. Heck, Deontay would be doing Chisora a huge favor by agreeing to fight him because this guy’s career is sinking in quicksand. I mean, Chisora just struggled to beat 38-year-old journeyman Hector Alfredo Avila by a 9th round TKO on April 20th of this month.

Chisora looks like he’s aged since his fight with Vitali Klitschko last year. He doesn’t look like the same fighter.

Deontay needs someone like Kubrat Pulev or Magomed Abdusalamov to fight because those guys would make it interesting for him.

« Mayweather: I offered Pacquiao $40 million for a fight before his loss to Marquez