Danny Garcia vs. Zab Judah Preview: Time to back up the Tweets 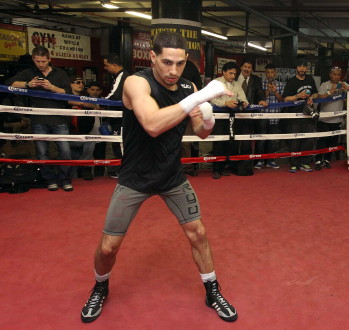 (Photo credit: Casino/Showtime) By Peter Wells: Danny Garcia and Zab Judah have for the last six months or so expressed their mutual dislike of each other in no more than 140 characters at a time, until Saturday 27th April when the tweeting stops, and the fighting begins. For those of you who have not witnessed the “twitter war” between the two fighters, then you are most probably wondering why this fight is receiving so much attention from fans.

The two boxers online squabbling and the near brawl between the two camps has quite simply sold the fight. Suddenly fight fans have gone from “couldn’t care less” to having a rather childish excitement that you usually get at school when you hear a fight is happening on the playground at lunch time.

After a double postponement Garcia-Judah is now going ahead, in what logically will be Zab’s final shot at world glory. But then again when has boxing ever been logical. At 35 Judah knows that time is no longer on his side, and another comprehensive knockout defeat could leave him as gatekeeper for on-the-cusp-of-world-title fighters. For Judah to upset the odds though will take the type of performance that we haven’t seen enough of from Judah. The Brooklynite was all talk before crumbling in 5 against Amir Khan before a victory over Vernon Paris earned him an unlikely shot at the WBC and WBA Light Welterweight titles.

The undisputed champion Danny Garcia currently stands in a position of power that every boxer dreams of reaching. A surprise destruction of Amir Khan last year was followed up by a one-punch KO of Erik Morales. The father-son, trainer-fighter relationship has worked brilliantly so far, in and out of the ring. Charismatic father Angel does all the talking, while son Danny backs it up in the ring. In the build up to Saturday’s contest, saying Angel Garcia has gotten under Judah’s skin would be a ridiculous understatement. During the initial press conference to announce the fight, Judah and Angel almost came to blows when Angel threw an insult about the cap Zab was wearing.

Judah may be wound up, but this may also spur him on to do what many consider impossible. Judah has moments of brilliance, but that brilliance is all to sporadic. That is why the pick is for Garcia to take his time in controlling the pace of the fight behind his jab, before unleashing those vicious left hooks. Sooner or later Judah will be caught and after a knockdown or maybe two, the referee will have no choice but to stop the contest in the middle rounds.

« Wilder vs. Harrison: Is this really a step up for Deontay?

Audley: Deontay is the most gifted athlete in the heavyweight division »