Trout: I’m going to take Canelo out of his game 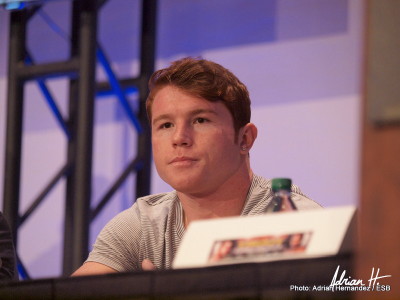 Trout is going to force Canelo to use his wheels in this fight, and make him move more than he ever has before. If you’ve looked at Canelo’s previous fights you’ll see that he’s a pure plodder and can’t move well at all around the ring.

Trout said to Fightnews.com “I don’t think he has his man strength yet. I will impose my will on him. I am going to take him out of his comfort level…I have the tools with my jab and foot work.”

Trout’s jab and footwork will no doubt neutralize Canelo’s body punching and inside game. Canelo can only land his body punches when he’s got a guy that is standing still just begging to be hit by him. Golden Boy Promotions has been like a mother hen to Canelo by feeding their “Golden Goose,” as Trout refers to him, with fighters that are tailor-made for him by putting him in with guys that are stationary and incapable of moving.

All of Canelo’s opponents have picked from the same mold – old, small and stationary. You can see why now that Golden Boy has been fighting tooth and nail for this fight not to take place because Trout is the opposite of the guys that they’ve been feeding Canelo.

Golden Boy obviously knows what they have in Canelo, and that’s why they didn’t want to let him fight Trout. The thing is Canelo doesn’t realize how limited he is as a fighter, but he’s going to find out the hard way on April 20th why Golden Boy didn’t want to put him in with Trout.

It’s bad because for him because he hasn’t yet figured out why Golden Boy has been putting him in with guys like Matthew Hatton, Alfonso Gomez and 41-year-old Shane Mosley. He doesn’t have a clue, but he’s going to get a brutal education by Trout on April 20th by Trout when he plucks Golden Boy’s “Golden Goose” clean in front of what could be 50,000 fans of his in San Antonio, Texas. It’s bad that so many of his own fans will be there to see him lose the fight, but it’s good that he’ll at least get a good payday out of the fight.

I expect Golden Boy to put Canelo back on the same soft diet that they had him on previously after he loses to Trout. In other words, Canelo will be once against matched against smaller, older stationary fighters that just stand there in front of him and get chopped down. We won’t be seeing Canelo back in with another Trout-like fighter. That won’t be the case. I suspect we won’t see Canelo back in with anyone even close to Trout for the remainder of his career.