Haye to fight in June and October 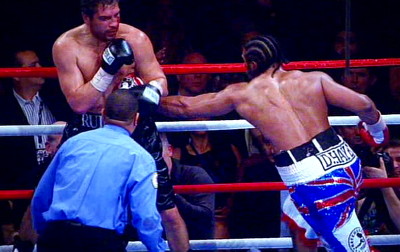 By Scott Gilfoid: Former WBA heavyweight champion David Haye (26-2, 24 KO’s) will be fighting in June and October as part of a two-fight plan to get in position to become the mandatory challenger for one of the Klitschko brothers, according to the telegraph.co.uk.

Haye plans on fighting top 10 contenders for both fights so that he can lock himself in as the mandatory. The purpose by becoming the mandatory is to force one of the Klitschkos to fight him while at the same time getting a bigger purse split when the time comes.

Haye tried to trash talk his way into another title shot, but that failed to work because Wladimi Klitschko already fell for that bit two years ago, and it too easy to beat him. 41-year-old Vitali Klitschko’s career is in limbo right now. It’s possible he could show interest in facing Haye in the near future, but right now Vitali’s not saying anything about what he’s going to do next.

Haye is ranked #1 by the WBA, #4 IBF, #4 WBO, and #5 WBC. It makes all the sense in the world for Haye to be looking to get a fight with Wladimir rather than Vitali because he’s already ranked high enough to where he could look himself in for a title shot in one or two fights against the 6’6” Wladimir.

Haye should forget about Vitali unless the aging fighter suddenly starts to show interest, but I’m not holding my breath waiting for that to happen.

Wladimir is the way to go, and the fight would at least give Haye a good payday, if nothing else. Haye obviously doesn’t have the size to compete with Wladimir, so the only thing we could expect from a fight like that is Haye losing by another lopsided decision followed by a whole bunch of excuse making for why he failed to perform.

What I want to see is who this so-called top 10 contender will be that Haye faces in June and October. Somehow I think it’s going to be a god awful mess of a fighter that he chooses. If they’re saying Haye is going to select a top 10 contender, I can see the guy being right at the 10 spot. In other words, a fringe contender. I’ve taken a look at all of the four contenders ranked at the #10 spot and they are as follows: Christian Hammer, Alexander Dimitrenko, Magomed Abdusalamov, and Tomasz Adamek. I can see Haye fighting Hammer, definitely. Not the other guys though, no way.

Pacquiao vs. Marquez IV: A tribute to the trilogy »