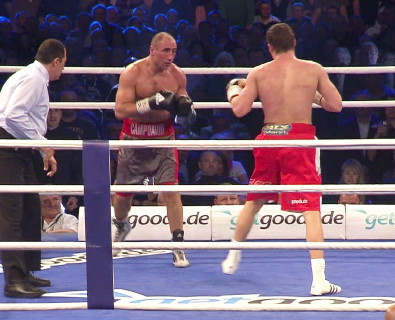 By Eric Thomas: Former WBO super middleweight champion Arthur Abraham (36-4, 28 KO’s) got some good news after having his swollen left eye checked out following his 4th round TKO loss to Robert Stieglitz (44-3, 25 KO’s) last Saturday night in Magdeburg, Germany. There is no serious damage to his eye, according to Fightnews.com.

Abraham’s left eye closed up completed in the 3rd round as a result of some heavy shots from Stieglitz. The fight was then halted at the start of the 4th round by advice of the ringside doctor due to Abraham’s eye having closed up. There was a worry initially that Abraham may have sustained bone or eye damage, but luckily he escaped that.

Abraham’s left eye began to swell up in the 2nd round after Stieglitz unloaded three minutes of punishing shots on Abraham. It was completely one-sided action with Abraham just covering up and patiently waiting for Stieglitz to stop throwing punches. That was Abraham’s mistake. He typically covers up and waits for his opponents to stop throwing punches before he starts to throw his own shots.

It’s almost as if he sees boxing as a game where you take turns instead of one where you can start throwing punches at any time. The problem was Stieglitz didn’t stop throwing punches in the first two rounds of the fight, and by the time he did take a couple of breathers in the 3rd round, Abraham’s left eye was closing fast. Abraham’s eye closed completely by the end of the round, and the fight had to be stopped to prevent him being potentially hurt.

The loss obviously is a painful one for Abraham because he just looked like he was overwhelmed, and didn’t know what to do. Abraham appeared not to want to be in the ring on that night, and never really got his own offense started.

Stieglitz says he wants to fight Abraham again immediately, so this will give Abraham a chance to come back from this loss immediately and get it behind him. However, if he doesn’t change the way he fights he’s going to get bombarded again by Stieglitz because you can bet Stieglitz is going to try and come out fast and do the exact same thing he did last time when he faces Abraham later on this year.

« Bellew-Chilema on Saturday, 3/30 at the Echo Arena in Liverpool, UK