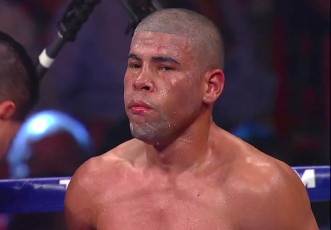 By Jason Kim: 29-year-old former two division world champion Juan Manuel Lopez (31-2, 28 KO’s) will be looking to turn his troubled boxing career around next month on February 2nd against 31-year-old Brazilian super bantamweight Aldimar Silva Santos (18-3, 9 KO’s) in a scheduled 12 round bout at the Coliseo Ruben Rodriguez, in Puerto Rico.

Lopez hasn’t fought in 11 months since being stopped in the 10th round by Orlando Salido last year in their rematch. After the fight, Lopez had some negative words to say about referee Roberto Ramirez Sr. when interviewed. That led to Lopez receiving a long suspension, but he’s now finally ready to get back in the ring to resume his career.

Lopez needs to really turn things around as he’s been stopped twice in his last four fights, and even in the two fights he won during that time, he had problems. Bernabe Concepcion knocked Lopez down in the 1st round in July 2010, and Lopez had to get off the deck to come back and stop him in the 2nd. In his win over Mike Oliver in October 2011, Lopez was getting tagged at will by Oliver in the 1st round. However, Lopez responded well, knocking Oliver down twice in the round and then a final time in the 2nd to get a stoppage win.

Santos won’t be much of a threat. He’s been stopped in two out of his last five fights in losses to Robinson Castellanos (12-9) and Jesse Magdaleno. He’s got decent power, but obviously his chin is his weak part of his game.

Lopez wants to get some quick wins under him and then move forward to a world title shot. It’s unclear how he’ll do at this weight because he’s really had to take off a lot of weight for his last few fights at featherweight and it may be time for him to move up to super featherweight so he won’t have to take off so much weight.

Boxing and the UFC; Does Boxing need MMA? »