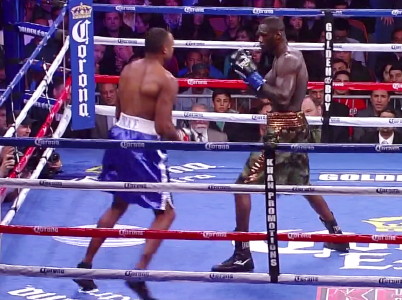 By Scott Gilfoid: Undefeated heavyweight Deontay Wilder (26-0, 26 KO’s) will be looking to show his stuff tonight against Matt Greer (15-8, 13 KO’s) at the Centro de Convenciones, in Villahermoso, Tabasco, Mexico. This is just a small step for the talented 6’7” Wilder in his move for an eventual world title this year.

Wilder says he’s not going to hold back his hidden offensive weapons that he’s been purposely holding back from his opposition and from the boxing public. This year, Wilder wants to show the world and his opponents everything that he has.

Wilder told boxingbeatandrhymes “I’m looking to achieve great things. I’m looking to achieve a lot. This is Deontay Wilder and I’m looking to be the next heavyweight champion of the world. I’m willing to fight anyone in the future. I want the best in the heavyweight division. This year I’m unleashing a new weapon. I really want to display my full potential talent. They really don’t know what I have to offer. This year I plan on showing everyone. I’ve never had the opportunity to show my other weapons. I feel if I don’t reveal them then why. 2013 is going to be a big year for me and we’re expecting big things. He [Wladimir] learned a lot from me as well.”

Wilder is an incredibly talented fighter, and I can only imagine how good he’s going to be now that he plans on showing his new offensive weapons. We’re probably talking about his powerful jabs, which Wilder says is better than Tyson Fury and David Price’s right hand power. We’re also likely to see Wilder’s left hook. I’ve only see Wilder throw this punch in a couple of his fights and he’s already produced instant knockdowns with it due to the power and speed he throws it with.

I had the pleasure of seeing Wilder throw his left hook while working out with IBF/IBO/WBA/WBO heavyweight champion Wladimir Klitschko and it was devastating to watch the power and the speed with which Wilder threw that punch with. As good as Wilder’s right hand is, his left hook is even better because he gets his entire body into it and it’s thrown with so much speed.

« Pavlik hanging up the gloves

Tim Bradley vs. Yuriorkis Gamboa fight won’t happen unless they can agree on the weight »