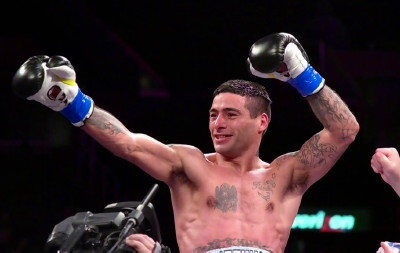 By Dan Ambrose: Showtime will televise a nice two-fight card head-lined by WBC interim light welterweight champion Lucas Matthysse (32-2, 30 KO’s) defending his title against lightweight Henry Lundy (22-2-1, 11 KO’s) at a still to be determined venue in Los Angeles, California. Also on the card will be welterweight Selcuk Aydin (23-1, 17 KO’s) facing Jesus Soto Karass (26-8-3, 17 KO’s) in a scheduled 10 round bout.

Matthysse, 30, is the one to watch in this fight because he’s got major power and an excellent fighting style that has already proven again and again to be crowd pleasing. He’s got two losses on his resume but you can still consider him unbeaten because in both of the fights he lost, he fought well enough to deserve the decision but was given a bad deal in fighting in other fighters’ hometowns.

It looks like Matthysse’s promoters at Golden Boy Promotions had problems finding a suitable opponent for him to fight because he’s had to settle for fighting 28-year-old Lundy, who is coming off of a 10 round majority decision loss in July of this year to Ray Beltran. However, Lundy is really good when he’s on and fighting well, but you just don’t know how he’ll fight against a guy with the kind of power that Matthysse has going for him.

I liked how Lundy looked in his wins over David Diaz, Patrick Lopez and Dannie Williams. He showed good power, nice hand speed, and really good defensive skills. It looked like Lundy was on his way to capturing a world title at lightweight after his win over Williams. However, in his last fight against Beltran last July, Lundy seemed to fall apart under the pressure that Beltran put him under and he ended up losing the fight by a 10 round majority decision.

Matthysse is even better than Beltran, so Lundy could have a lot of problems in his next fight if he can’t find a higher gear to shift his game into because the way he’s been looking recently he’s just not going to be able to compete in this fight unless he finds more power and better defense to fend off Matthysse’s attacks.