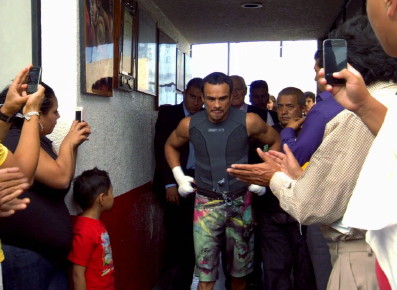 By Chris Williams: Top Rank promoter Bob Arum wants to wait before putting his number #1 money fighter Manny Pacquiao back in the ring with Juan Manuel Marquez. Arum would like to have Pacquiao get his brain checked out at a good hospital at the “Cleveland Clinic Lou Ruvo Brain Center,” according to Philboxing.com. Arum wants to make sure that Pacquiao is fit to fight again before he sends him back out there to fight Marquez for a 5th time.

Pacquiao suffered a devastating knockout last Saturday in his fourth fight with Marquez. Pacquiao was actually knocked senseless from a right hand from Marquez, and it was pretty scary to look at.

According to Philboxing.com, Arum wants Paquiao to wait until “June or September” before he fights again, and he doesn’t see Pacquiao needing any kind of tune-up to make sure that his faculties are still there. Arum is okay with sending Pacquiao straight back into a fifth fight with Marquez rather than testing his fighter to make sure he won’t fall apart from under the strain getting hit.

I guess I can understand that. It’s kind of like when Antonio Margarito was coming off of three eye surgeries and a year layoff.

The logical thing would have been for him to fight some light tune-ups to make sure his surgically repaired right eye would hold up under the pounding of a fight, but Margarito instead faced Miguel Cotto in a rematch and bad right eye immediately started closing up on him, and eventually led to the fight being halted.

Had Margarito fought a tune-up fight, we’d have likely seen that his eye wouldn’t hold up under the course of a fight and that would have likely wiped out a big payday fight against Cotto. I think we’re seeing the same thing with Pacquiao now. If they put him in with a tune-up that doesn’t bring big bank, we could see Pacquiao knocked out cold by some lesser named fighter, and that in turn would finish any ideas of Pacquiao fighting Marquez for a 5th fight.

So instead of doing the arguably smart thing by putting Pacquiao in with a safe fight to see if he can still take a punch, he’s put in with Marquez in a big money fight. If Pacquiao gets knocked out cold again at least he’ll get another big payday before retiring, not that I believe he would retire from a second loss.

No, I think Pacquiao will just keep fighting even if he gets knocked out again by Marquez. The money he gets is just too damn good, and I see Arum matching him soft after another KO loss and doing what he did with Cotto after he was knocked out by Pacquiao. Arum put him in with nothing but soft opposition for two years and Cotto did well.