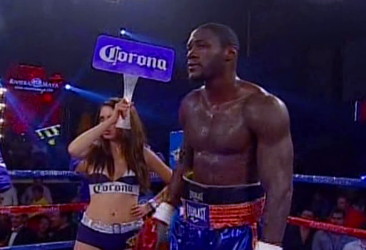 By Scott Gilfoid: Unbeaten heavyweight Deontay Wilder (25-0, 25 KO’s) is only 18 knockouts away from tying the record for most consecutive knockouts by a heavyweight, which was set by Lamark Clark with 44 KOs. Deontay’s next victim will be Kelvin Price (13-0, 6 KO’s). Wilder will be fighting Price on December 15th at the Sports Arena, in Los Angeles, California, USA.

It’s going to be nice for the 27-year-old Wilder because the fight will be televised by Showtime in the United States a lot of boxing fans will get to see this special talent.

Below are the heavyweights with the most consecutive knockouts:

I think Wilder can easily score another 18 consecutive knockouts to tie Clark’s record even as Wilder moves up against increasingly better opposition with each for 2013. Kevlin Price, 6’7″, is already a step up for Wilder because this guy has a talent has a win over Tor Hamer. Beating Price will be a nice feather in Wilder’s gap for him to move forward into 2013. Next year, Wilder will be looking to add a lot of scalps to his resume with Wilder setting a course for the Klitschkos. He needs probably another four or five good wins and he’ll be there in position to fight for a world title.

Wilder has been spending the last couple of weeks working as a sparring partner for IBF/IBO/WBA/WBO heavyweight champion Wladimmir Klitschko to help get him ready for his November 10th fight against Mariusz Wach. Wilder has won a lot of respect from Wladimir, who told Wilder that he’s the fastest heavyweight he’s ever been in with. Wladimir sees great things from Wilder and this has given him a lot of confidence that he can succeed at the next level.

Wilder needs to start stepping it up because he’s 27 now and he can’t fall into the same trap as 29-year-old British heavyweight David Price by taking on B level heavyweights and letting the years fly by.

The great trainer Emanuel Steward said this about Wilder recently to RingTV: “As far as the American fighters, he’s No.1 to me among the American heavyweights. I think that he could step up and challenge in one year. I’m talking within 12 months.”

Now what does that tell you? Steward saw the great potential that Wilder has going for him and felt that he could fight for a title within a year. Granted, Steward wasn’t too pleased with the soft matchmaking done by Wilder’s promoters but in terms of his talent, Steward felt that Wilder is the top fighter in the United States and feels he’ll be ready for a title shot by next year.

« Mayweather – If all else fails blame Arum

Kessler: That wasn’t the real me against Andre Ward »