Shaw: Adrien Broner can be the next Mayweather Jr 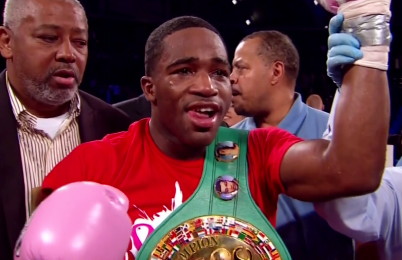 By Scott Gilfoid: Gary Shaw, the promoter for former WBC lightweight champion Antonio DeMarco, was in awe of the performance put on by Adrien Broner (25-0, 21 KO’s) last Saturday night in giving DeMarco a methodical beating en route to getting an 8th round stoppage. It was a vintage Mayweather-esque type of show by Broner as he electrified the huge crowd with his beautiful pinpoint shots and his airtight Mayweather-like defense.

Shaw said this about Broner as quoted by ESPN writer Dan Rafael: “I think he can be the next Floyd. He’s fast, he has the moves, he has great defense. Obviously, he has punching power. He hurt DeMarco a few times, cut him up. I think Broner is the total package.”

I’m in total agreement with Shaw. Broner rights just like Mayweather and he’s going to be getting huge paydays like him in the near future. Broner sees himself becoming the first billion dollar athlete and that’s pretty impressive.

Broner has got the whole package and there’s really no one at lightweight that can really test him. I thought for a while that DeMarco could because he was seen until last Saturday as the best fighter in the lightweight division. But Broner completely decimated DeMarco, landing 241 of 451 shots for a 53% connect percentage, according to Rafael. Landing over 50% incredible for any fighter.

I don’t care who you are. If you’re landing over 50% of your shots you’re pretty special. Most of the time top fighters land in the upper 20s to early 30s in terms of connect percentage, but here Broner is landing over half of his shots and those were big shots, not little ones. That just shows you how good Broner is.

When Broner started throwing combinations in the 5th round, he really started to beat up DeMarco’s face, and I knew then that the fight wasn’t going to go that much longer. That was a really bad round for DeMarco and his team should have pulled him out of the fight at that point because it only got worse. He wasn’t competitive at all and was just taking terrible punishment that he didn’t need to. When you’re fighter is getting beaten up the way that DeMarco was you’ve got to halt the fight if you want to preserve that fighter for other big fights. You can’t just let him take needless punishment in a non competitive fight like this one was.

« Deontay Wilder now the #1 heavyweight in the U.S

Hatton: I have too much for Senchenko »