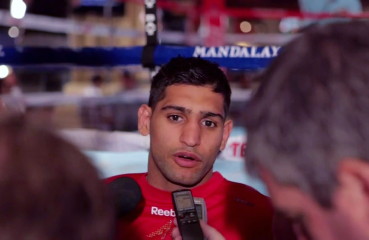 By William Mackay: On the surface it would appear that Amir Khan (26-3, 18 KO’s) doesn’t have much to worry about in his December 15th fight against Carlos Molina (17-0, 7 KO’s) at the Sports Arena, in Los Angeles, California, USA.

After all, Khan’s promoters at Golden Boy Promotions has gone to the trouble of searching for and finding a small lightweight with no power for Khan to look good against and avoid getting knocked out again.

However, it still doesn’t mean that there’s no pressure on the 25-year-old Khan, because just by virtue of having lost his last two fights Khan now has huge pressure on him. If he loses this fight against this guy that’s been specifically dug up by Golden Boy for Khan to beat with ease then really there’s only two options for Khan and Golden Boy.

Khan can either retire and end his plummeting career before it gets even worse or Golden Boy can steer Khan towards even weaker opposition in hopes of getting a series of cash out fights for him against big names where Khan loses badly in each one of them.

A loss to Molina pretty much would be the end of Khan’s career in terms of him being a serious contender. Like I said, Khan could still be brought back against really, really opposition to get him into a cash out fight against the likes of Manny Pacquiao and Floyd Mayweather Jr., but it would have to be really weak opposition because if Khan can’t even beat Molina then that tells you how bad things have gotten with him.

Molina is going to be approaching this fight on December 15th like a batter looking to hit a homerun. He knows what he has in front of him in the fragile-chinned Khan and he’s going to be swinging for the fences with every punch. When you have a fighter like that it makes them dangerous even though they’re not big punchers. Even a weak puncher can find enough power to KO a weak-chinned fighter if they’re putting everything they have into each punch.

« Deontay making a huge step forward in his career against Price