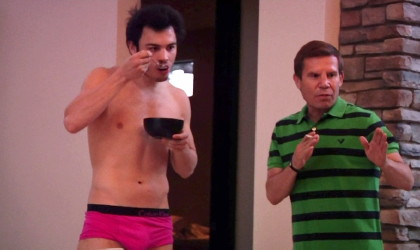 By John F. McKenna (McJack): In another case of a boxer claiming not to know what he was doing was illegal, former WBC middleweight champion Julio Cesar Chavez Jr. (46-1-1, 32 KO’s) now claims that the reason he tested positive for marijuana is that he drank the substance in his tea. Julio, the son of the Mexican superstar of the same name tested positive for marijuana in his system after losing his WBC title belt to new champion Sergio Martinez.

It is particularly troubling that Julio waited three weeks to come up with the excuse that he drank the marijuana in his tea because of insomnia and to help settle his nerves. Chavez also claims that he never smoked marijuana and checked with a doctor before drinking the marijuana laced tea. It’s almost as bad as “The dog ate my homework” excuse we used as children when we failed to complete our school assignments. The teachers of course did not believe us then and it is doubtful that very many boxing observers take Julio’s excuse seriously now.

Every fighter knows the dangers of using banned substances and are only too well aware of the consequences if the banned substances are detected in their system. It is now more crucial than ever that boxers remain drug free in the aftermath of the Lamont Peterson and Andre Berto scandals. Peterson also claimed he was under a doctor’s care, but failed to notify the Nevada State Athletic Commission. It was a costly mistake as Peterson wound up being stripped of his newly won WBA title belt.

Chavez lost his WBC belt to Martinez but he put himself at risk of being suspended and the possible forfeiture of his share of the purse for his fight with Sergio. What is most troubling is that Julio, who had already been suspended for a banned diuretic earlier in his career, saw nothing wrong with again ingesting a banned substance before the hugest fight of his life.

Julio’s irregular training habits in addition to his not showing up at training sessions while leaving trainer Freddie Roach waiting sometimes for hours is more than troubling. It shows a severe lack of self discipline.

Coupled with his eccentric training routine Julio’s positive drug test only serves to bolster the argument of many, including Sergio Martinez, that he was only a paper champion, and achieved his WBC title belt only because of who his father is.

« Tyson referring to Mayweather: Staying undefeated is okay when you’re fighting once a year