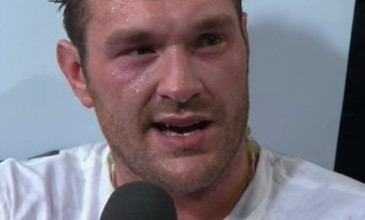 By William Mackay: Unbeaten heavyweight contender Tyson Fury (19-0, 14 KO’s) still doesn’t want to take on the Klitschko brothers despite being ranked #5 by the WBC, but he does feel that he’s ready to take on former WBA heavyweight champion David Haye and is hoping he’ll agree to fight him in the near future.

Looks like Fury wants a payday. I wouldn’t mind seeing him fight Haye, but I’d prefer to see Fury at least beat David Price to earn the shot agaisnt Haye first. That would be the logical thing for Fury to do. It doesn’t look good seeing Fury bypassing a fight with Price and giving up his British and Commonwealth heavyweight titles in the process. It’s hard to take Fury seriously after that. In choosing Haye, it’s a win-win situation because even if Fury gets knocked out and obliterated, he’d get a big payday in the process. It’s not like fighting Price where the money wouldn’t be as good and the chances of Fury losing would be very high.

Haye reportedly isn’t interested in fighting Fury, so he’s going to have to look elsewhere if he wants to get a big money fight. Haye is totally focused on trying to land a big money fight against WBC heavyweight champion Vitali Klitschko, and he’s not going to blow his chance at that fight by taking a low paying stay busy fight against the unproven Fury.

Fury didn’t look that impressive in beating journeyman Vinny Maddalone last July. Fury did little more than slap and looked sloppy throughout. Had that been Haye in there with him instead of Maddalone, I think Haye would have knocked Fury out in three or four rounds. Haye is so fast and when he hits you he’s capable of knocking you out with a single shot. He’s not like Fury, who slaps a lot and doesn’t possess huge power or speed.