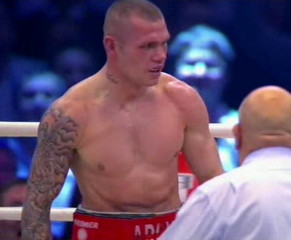 By Scott Gilfoid: #2 WBO, #3 WBA, #3 WBC, Martin Murray (24-0-1, 10 KO’s) will be fighting for the interim WBA World middleweight title on November 24th against an opponent still be to determined at the M.E.N Arena, in Manchester, England. This is the same card that Ricky Hatton will be making his comeback on, and that’s going to be bizarre to see him fighting. I hope they don’t pick someone too good for Ricky. Hate to see him get knocked cold again.

As far as Murray getting the chance to fight for the interim WBA 160 lb title goes, I think that’s so wrong. Murray, 29, needs to actually beat someone and he’s not done that. All his victories are against obscure guys that I’ve never heard of. Yeah, Murray got a 12 round draw in his fight with WBA Super World middleweight champion Felix Sturm last December, but I had Sturm winning that fight and no way did I see that as being a draw. Sturm must be really slipping for him to have struggled against the likes of Murray. A younger Sturm would have likely done a number on Murray, but he’s gotten kind of old lately.

So who will the 29-year-old Murray fight for the interim WBA strap. Well, it’s probably not going to be #4 WBA Peter Quillin, because he’s already taking on WBO middleweight champion Hassan N’Dam N’Jikam in his next fight, so he’s not going to be facing Murray.

The #1 and #2 spots are open with the WBA. That means that Murray could end up fighting someone like #5 WBA Julien Marie Sainte, #6 Sebastian Zbik or #7 Jorge Navarro for the interim WBA title. Heck, they might as well just give the belt to Murray because those aren’t even tough fights.

All I know is that Murray is going to get spanked if he ever fights WBA World middleweight champion Gennady Golovkin. That’s a knockout waiting to happen for Murray.