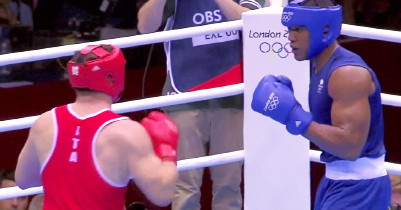 By Dan Henderson: The London 2012 Olympic games finally came to a close today and in terms of the boxing event Team GB had an excellent games which saw them top the medal table with three golds, one silver and one bronze.

The first gold went to Nicola Adams who was the first ever female to win a boxing gold after her 16-7 victory against rival Cancan Ren which included a knockdown in Adam’s favour. From the opening bell Adam’s showed great energy and boxing skills, I’m sure she believed that there was no way she was going to lose especially in front of a partisan support. The second gold medal went to Luke Campbell after his hard fought 14-11 victory against Ireland’s John Joe Nevin which saw Campbell knock down his Irish opponent, Campbell became the first British fighter since 1908 to win the bantamweight gold. The fight was a very entertaining one which saw Campbell take the first round but Nevin stormed back in the second round with some crisp counter punching but cheered by the crowd Campbell regained his composure and saw out the fight to win the gold.

The third and final gold went to super heavyweight Anthony Joshua who beat Italian Roberto Cammarelle via countback as the scores were tied 18-18 after three rounds. The fight was tough but I think Joshua deserved it unlike some of my fellow writers who may be a bit jealous because the Americans had such a poor showing. Anthony had it tough throughout the games but people seem to forget he had roughly 37 amateur fights before the Olympics so to win gold was an impressive accomplishment.

Team GB’s Fred Evans picked up a silver medal after being beaten by Kazakhstan’s Serik Sapiyev in another good contest but Evans did lose to the better fighter on the night. Our bronze medal was won by Anthony Agogo after he was outclassed by Brazil’s Esquiva Falcao Florentino in his middleweight semi final, Agogo had suffered two standing eight counts but he also lost to the better opponent on the night.

All in all it was a successful games for Team GB and it sets the bar high for future games and future Team GB boxers to win more medals which we are more than capable of achieving. We went into the games with high expectations, this was the best boxing team we had ever put together and they did not disappoint and the medal return was excellent. The ExCel was a great venue and it was sold out for every session.

What was your favourite moment?

« Erislandy Savon could be a star someday if he leaves Cuba