Cammarelle: It was an injustice! 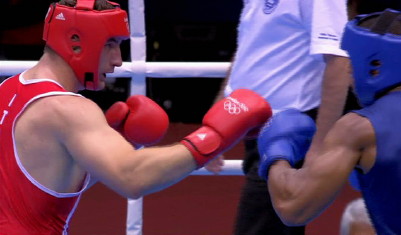 By Scott Gilfoid: Having tasted the bitter sweet taste of a terribly controversial decision loss to Britain’s Anthony Joshua in the super heavyweight division gold medal match on Sunday in the 2012 Olympics in London, the talented Italian Roberto Cammarelle was still deeply upset with the decision.

Cammarelle felt he did more than enough to win the fight and he wasn’t pleased at all with the scores of the five judges that scored the fight.

Cammarelle, 32, told Ilmessaggero.it “It was an injustice. The verdict was home decision. I would have preferred that I did lose by a point, but equal, I think I won the match…At the end of the match, I smelled something burning. For me today is over. This boxing is dead. It is not the sport that I know…My only regret is that Joshua has not been honest. He said that he had won.”

Cammarelle went on to say that he wasn’t about to boycott the medal ceremony to receive his Silver medal for the 2012 Olympics.

I really respect Cammarelle. He was too much of an adult to boycott the ceremony. If it had been me, I would have been out of there in protest. It’s such a sad end for a talent that fought well enough to get the decision but who found himself on the receiving end of a controversial count back decision after his fight with Joshua ended in an 18-18 tie.

Cammarelle’s amateur career will end soon after the Italian games. He finishes his Olympic career with a Bronze, Silver and Gold medal. That’s not bad, but it sure would have looked a lot better had he received the gold medal for this year’s Olympics because he definitely well enough to deserve it.

There won’t likely be a pro career, as Cammarelle hasn’t mentioned wanting to turn pro, event though his chances of making good money and finding success would be good. He’d have to skip facing the lower level opposition and go straight to top contender bouts, and that might be a little tough for him because he could find it hard to adjust to the longer bouts.

« DeGale: I’ll be world champion before the next Olympics