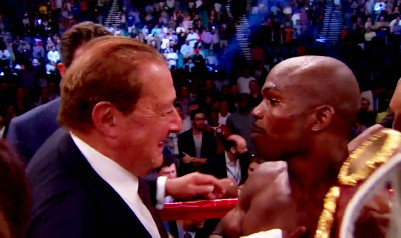 By Chris Williams: I’ve seen more than a few Manny Pacquiao fans talk about how Pacquiao has the Midas touch on his opponents to where they turn golden and become popular fighters once they get a fight with Pacquiao. If that’s the case then why isn’t WBO welterweight champion Tim Bradley hugely popular after he completely schooled Pacquiao last June? What happened? The last time I checked, Bradley is still pretty much the same anonymous fighter that he was before he fought the Filipino.

Bradley had Pacquiao stunned a couple of times in their fight, but was too broken down with feet and ankle injuries to try and finish him off.

My view on this subject is that there was so much fluff thrown up in the air by Pacquiao fans complaining about a so-called robbery after Bradley beat him that some of the casual boxing fans who didn’t know what to think just bought it hunk, line and sinker without looking at the Pacquiao-Bradley fight with an objective eye and with the sound turned off on the television set so that they could filter out the fawning being done by the talking heads on HBO and the screaming of the Pacquiao fans in the crowd.

But I think we can shoot down completely the theory that every Pacquiao opponent becomes popular after they face him, because Bradley sure isn’t popular and neither is Pacquiao victims: Joshua Clottey and Antonio Margarito. Sure, they got some fans but I don’t they came away from their losses to Pacquiao more popular than they were going in.

« Arum needs to spoon-feed Pacquiao until he gets Mayweather bout

Chavez Jr. won’t do better than Pavlik and Williams against Sergio Martinez »