Abraham to test his power on Stieglitz 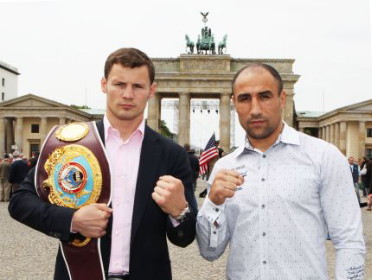 By Allan Fox: Former IBF middleweight champion Arthur Abraham (34-3, 27 KO’s) has done moderately well in fighting in the super middleweight division since moving up in weight in 2009, losing three of seven fights during that time frame. Abraham has lost to the only three good opponents he’s faced.

On August 25, Abraham faces WBO super middleweight champion Robert Stieglitz (42-2, 23 KO’s) at the O2 World Arena, Kreuzberg, in Berlin, Germany. This will be a good test for Abraham, because Stieglitz is clearly better than the guys that Abraham has beaten in the last three years with the exception of Jermain Taylor.

Abraham doesn’t have the same boxing skills as the 31-year-old Stieglitz, so he’s going to have to try and blast him out like he’s taken out fighters like Taylor, Stjepan Bozic and Pablo Farias in the past three years. However, those were vulnerable fighters in terms of their ability to take punishment, and it’s unclear whether Stieglitz has the same problems.

If Abraham can’t score a knockout over Stieglitz, he could be in trouble because Stieglitz if a volume puncher and Abrabam can’t beat a fighter like this because he doesn’t have a high punch volume and can no longer fight three minutes of every round.

Abraham realizes that he has problems with his inability to let his hands go, and he plans on trying to throw more punches in this fight. It’s doubtful that Abraham will be able to do this, because if it were something that he simply could will himself to do then he would have done this ages ago when he was suffering losses to Ward, Andre Dirrell and Carl Froch. What is more likely is that Abraham physically can’t fight harder than 30 seconds of every round without gassing out and possibly getting hurt. Whether fighting only 30 seconds of every round will get the job done against the active Stieglitz remains to be seen.

« Froch likely to face Farias or Andrade next

Dzinziruk in make or break fight against Gonzalez on September 1st »