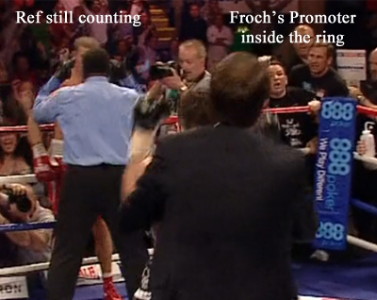 By Scott Gilfoid: I see a lot of Carl Froch’s fans are up early today crowing about his so-called victory over IBF super middleweight champion Lucian Bute last night, but it was hardly a victory in my eyes. I don’t know how they conduct fights in the UK, but around the rest of the world a fighter is disqualified when one of his team members steps foot in the ring while the fight is still underway.

In case you missed it, Eddie Hearn, the promoter for Froch, rushed into the ring while Bute was receiving a standing eight count by the referee. It looked as if the referee had only reached a count of three when Hearn rushed into the ring and started hugging Froch and celebrating like no tomorrow. What the heck was that? Right there the fight should have been stopped and Froch disqualified. I know it hurts but Froch should have lost the fight from that. Rules are rules.

I mean, we just saw Carlos Molina disqualified in the U.S for one of his team members stepping into the ring when he was being given the count after being knocked down. It should have been the same thing for Froch.

I know Bute will probably take the high road and not protest this with the International Boxing Federation, but if he did he’d have a good chance of having Froch’s win changed to a no contest. We’ve got Amir Khan looking to get a no contest in his loss to Lamont Peterson because he used synthetic testosterone a month before their fight. He tested cleanly for the actual fight, but Khan still wants it to be a no contest. Well, I think Froch’s wins should be changed to a no contest because it’s painfully obvious that Hearn stepped inside the ring while the fight was still underway. As such, Froch should have rightfully been disqualified and Bute been given the win. I see it as a rookie mistake on Hearn’s part. Do they normally step out in the ring while the fight is still taking place in the UK? If so, this is something needs to be brought in line with what occurs in other countries. We can’t have a fighter’s team rushing into the ring while the fight is technically still underway. Who knows? The referee might have let the fight continue but with Hearn in the ring how could he?