Smoger: Margarito was turning the fight around on Cotto when it was stopped 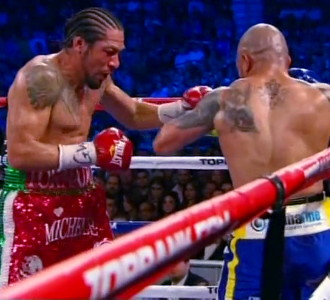 By Dan Ambrose: Referee Steve Smoger wished that Antonio Margarito had been allowed to come out for the 10th round in his recent loss to WBA junior middleweight champion Miguel Cotto. Smoger said he wanted to let him, but the ringside doctor stepped in and halted the fight due to Margarito’s rapidly closing right eye.

Smoger noted at the time that Margarito was coming on and saw the fight as changing. The doctor prevented what may have been another Cotto knockout loss by stopping the fight, because the bout was mirroring how the first fight transpired three years ago with Margarito coming on in the 10th, hurting Cotto and then stopping him in the 11th.

Smoger said to RingTV “I sensed a momentum shift [in the 9th round]. I saw him [Margarito] catch Miguel with a couple of shots on the ropes that had me saying, “Wow, his persistence is paying off.” And I would have loved to see him come out for the 10th.”

I saw the same thing in the 9th. Margarito caught Cotto with some beautiful shuts and seemed to stun him at one point with a left hand. Margarito continued to chase and batter a tired looking Cotto for the remainder of the round. It was clear that the fight momentum had completely changed and Cotto was going to be in trouble in the next couple of rounds. And that’s where it gets weird. This was a fight that took place on Cotto’s turf, you must remember.

The ringside doctor couldn’t have picked a worse time to step in and halt the fight if he tried. Had he stopped it in any other round it wouldn’t have been an issue, but it was so bad that he chose exact point in the fight when Cotto was mentally and physically beginning to cave in again.

The doctor was just doing what he felt was right, but I think he was too cautious and stopped the fight before Margarito could follow history and take Cotto out again. Obviously, if there is a rematch the fight cannot happen in New York because it needs to be in a neutral venue, and with a doctor that is a little more tolerant towards injuries.

I see this as a tainted victory for Cotto because it was stopped right when he was starting to take punishment and run out of gas. This was a 9 round fight that needs to be done over to find out who really is the best fighter. Cotto didn’t prove a thing.