Juan Manuel Marquez against the odds 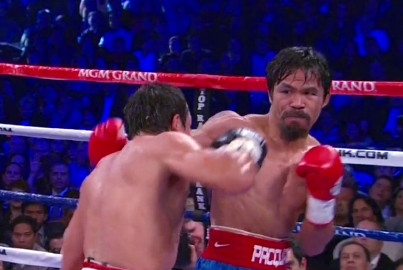 By Julian Valenzuela: How is it that a boxer can have the career, be in the type of fights that Juan Manuel Marquez has had and yet never really get the respect he deserves? He has fought the best, he has beat the best, and yet in every major fight he is considered an underdog.

It’s kind of sad really for boxing and the real boxing fans who see what he really is and stands for and has given to the sport. Why is it that Sergio Martinez, who has fought one fight in the last year against a nobody like Darren Barker in which he looked horrible, get rated number #3 pound for pound? Or Nonito Donaire, in which he also fought once in the last year, against a nobody, and looked bad also, get rated number #4 on pound for pound list?

Marquez who has been active, fighting tough fighters, and just fought the p4p best fighter gave him all he can handle in which I saw him win, rated number #5 on the p4p list. It’s truly sad I’m sure it’ll have the same people who cant except that there could be true Mexican fighters in the sport and will start writing how bad Marquez is and how old he is but deep inside you know he is a true legend and will still beat all fighters from 147 down except for Floyd Mayweather which I believe cant lose to anyone in the sport today.

Klitschko says Chisora will be a tough fight »