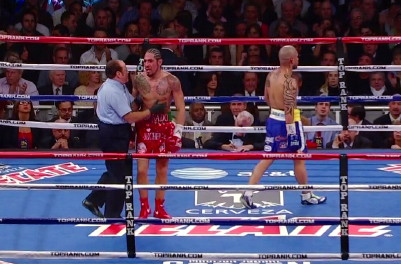 By Dan Ambrose: After seeing the Miguel Cotto vs. Antonio Margarito fight last night for the second time, I’m now even more convinced that Cotto was saved by the referee stepping in and halting the fight after the 9th round last week to prevent Cotto from being knocked out for a second time against the tough Mexican warrior Margarito. Cotto doesn’t deserve to move on and fight Manny Pacquiao again or face Floyd Mayweather Jr. for that matter. Cotto deserves Margarito one more time.

The fight pretty much proved that Margarito beat Cotto fair and square in their first fight in 2008, because Margarito was wearing Cotto down much in the same way this time. At the end of the 9th, Cotto was looking weaker, tired and was starting to take bad punishment. Had the referee not halted the fight at that point, Margarito would have had three long rounds to work Cotto over, bust his face up, and hurt him with uppercuts like last time.

I’m convinced we would have seen Cotto down on his knees in a submissive position ready to surrender to Margarito’s force of will. I saw it happening it really makes me angry how the doctor halted a fight where Margarito could still see out of his swollen right eye. The fight needed to have continued, but the stoppage clearly favored Cotto. He didn’t have to take Margarito’s punishment when he no longer had the legs to run anymore.

I think there really needs to be a third fight between Cotto and Margarito, but this time in a neutral venue with a different doctor working the fight. It can’t be in Cotto’s neck of the woods on the East coast because we could have Cotto winning by another controversial stoppage. It needs to be Vegas or ideally Mexico. I’d prefer Mexico since we just had the fight in Cotto’s territory.

It’s only fair that the fight be held in Margarito’s home country. Right now each fighter has won one fight a piece, and Margarito’s win was a lot more impressive than Cotto’s. To find out who the better fighter is, they need one more fight but we can’t have a doctor hastily jumping in and putting a stop to it at the first sign of trouble for Cotto.