Can Miguel Cotto do the impossible? 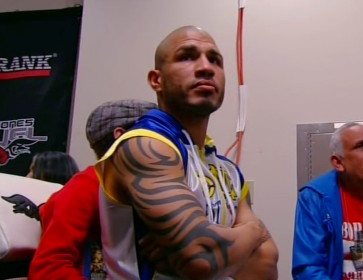 By Ricky Colon Fernandez: Super welterweight champion Miguel Angel Cotto has resurrected for the second time in 3 years, something that many fighters can never do, even the greatest of all times. Cotto has been criticized by many boxing writers even when he was undefeated and was plowing his way thru the ranks. Many say that Cotto has no heart but he has shown heart on many occasions.

He’s also been labeled as vulnerable but to me this just makes him exciting to watch because the fight can change on a dime. He has been referred as having a suspect chin I disagree with this for many reasons for ex. If Margarito indeed had loaded gloves Miguel took 11rds of punishment before he folded.

Against Joshua Clottey because of the cut the fight could have been ruled a no contest as it was the result of a head butt before the 4th round, yet Miguel chose to continue and fight to get a winning result.

Against Manny Pacquiao he went 12 rounds when Pacquiao was knocking guys out in the 2nd round with one punch knockout power. Since the Pacquiao fight I’m convinced that Miguel Cotto has changed as a fighter for the better. He has better footwork and lateral movement. He implemented his jab again, one of the best in boxing. His defence is underrated. Although he doesn’t carry his power as much in his new weight class.

Now to the good stuff. Cotto has many options to cement his legacy, although I think he already has.

2.a rematch with Manny Pacquiao – (try to Avenge the loss to the only man he hasn’t beaten as a professional boxer)

3.a Mega fight with Floyd Mayweather

A fight with Chavez Jr. could mean the possibly of a 5th world title in 4 divisions. Would make him the first Puerto Rican boxer ever to do so. A guaranteed money fight. And another chapter to the Puerto Rico vs Mexico rivalry.

A rematch with Manny Pacquiao is another money fight. Has a good redemption story to it. And would definitely could cement him as one of the few boxers ever to have avenged his losses. Even more so if he wins in dramatic fashion.

A super Mega money fight with Floyd Mayweather is very possible and may come sooner then later. He would receive the highest payday of his career. For Mayweather it would be the next best thing if the pacquiao fight cannot be made. I believe Cotto has a chance to win. And I’m positive that he would give Floyd Mayweather the fight of his life. I’d rather watch this one then the latter two. Because the outcome can be anything.

Other fights for Cotto would be Saul Alvarez ,although I believe it’s to early and unfair to both fighters because if Cotto wins he will be criticized as beating a young champion still under development. Saul will never achieve greatness which I believe his destined to achieve.

Sergio Martinez who in my eyes is a phenomenon and a very dangerous fight for Cotto.casual fans say Cotto is ducking him but the truth is Cotto already made him an offer and Martinez refused it. Mind you it would had been his biggest payday. Greedy promoters are at fault for this not happening.
Can Cotto defy the odds once again?

Where is Cotto headed? Will he fail? Can he make history? Will he cement himself? Do you think that Miguel Cotto can do the impossible?

What’s next for Margarito? »