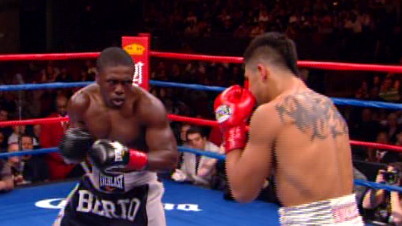 By Eric Thomas: It’s been eight months since then challenger Victor Ortiz made WBC welterweight champion Andre Berto look like an old man in wearing him down and beating him by a 12 round unanimous decision in April 2011. Berto has since come back and beaten IBF paper champion Jan Zaveck by a 5th round stoppage to briefly claim his International Boxing Federation belt back in September.

Ortiz lost his last fight to a much better fighter in Floyd Mayweather Jr. by a 4th round TKO last September in a fight where Ortiz lost his mental composure and decided to headbutt referee. That was the first mistake Ortiz made in the fight. The second mistake was to let his guard down by apologizing one too many times, allowing Mayweather to take advantage by blasting Ortiz with a combination that stopped him.

Ortiz is now back having learned his lesson and will be fighting a much easier opponent than Mayweather in 27-year-old Berto, who is a lot easier to hit compared to Mayweather. Ortiz won’t shy away from getting rough if the occasion asks for it, but he’s also not going to grovel and ask for forgiveness if he does foul him. Ortiz intends to keep fighting and use a take no prisoners approach to this fight.

The last time he fought Berto, Ortiz got in close and stayed there all night long working Berto over with hard power shots and wearing him down. Ortiz had to have seen how inexperienced Berto seemed in fighting on the inside in his close 12 unanimous decision win over Luis Collazo in 2009. There was where the blueprint was made to beat Berto, and Ortiz only to follow it and he got a win.

In looking at Berto’s win over Zaveck, he still looks uncomfortable when he’s fighting on the inside and when he’s taking any kind of pressure. Berto is good when his opponent isn’t throwing punches, but when they open up with shots, he stops fighting and just tries to survive. Berto has zero counter punching skills and is more of the type of fighter that takes turns with his opposition in throwing punches instead of interrupting their flow to counter them.

« Klitschko-Mormeck: Wladimir may have to carry Mormeck in this fight

Cotto needs to give Margarito a rematch »