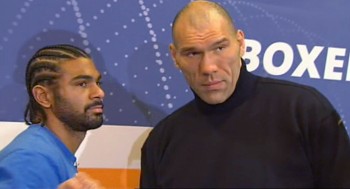 By William Mackay: Former WBA World heavyweight champion Nikolay Valuev (50-2, 34 KO’s) has been elected to Russian parliament for a five year term and Valuev, 38, reportedly won’t be continuing his boxing career until his commitment to Russian politics have completed. By that point, the 7’2” Valuev will be 43-years-old and very likely too old to still compete at the same level he’s become used to in the last six years of his career.

Valuev told RIA-Novesti news “While I’m in parliament I should forget appearing in the ring. It’s impossible to combine such a responsible job and serious preparations for the bouts.”

Valuev hasn’t fought since losing his WBA title on a questionable 12 round majority decision loss to David Haye in November 2009. Valuev outworked and out-landed the challenger Haye but still found himself on the losing end. A lot of boxing fans felt that Valuev should have kept his title and felt the loss wasn’t a fair one. I personally saw the fight and had Valuev winning it as well. It obviously wasn’t a good way for Valuev to lose his title especially with all the ridicule he had to take from Haye in the weeks leading up to the fight. Haye made fun of Valuev’s looks constantly and said he smelled. Haye seemed to go too far with hyping the fight.

Since that fight, Valuev has had surgery on his left shoulder and right wrist to repair some problems. Valuev and Vitali Klitschko had been attempting to put together a deal for a fight, but the offer that Vitali made to Valuev, $1.5 million, wasn’t what Valuev’s promoter Don King wanted. He was looking for $2.5 million. Vitali then backed out and went in another direction, fighting Shannon Briggs instead.

Chavez Jr. will have problems with Rubio’s power »