Khan: If Prescott beats McCloskey our rematch could happen sooner rather than later 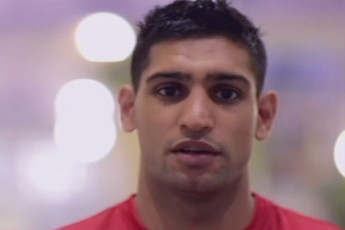 By William Mackay: Amir Khan took the opportunity to fire back at his old conqueror Breidis Prescott on twitter earlier today, saying “Prescott talking rubbish again or shall I say his manager/promoter talking s*** for him. They all crying for a payday. Hahahah. That’s all they want. You don’t see Prescott calling out [Kevin] Mitchell who beat him. I wonder how much he’s getting paid to fight [Paul] McCloskey. Honestly, I don’t think Prescott will beat McCloskey. Paul’s very ackward and tricky to catch. If he does our rematch will happen a lot sooner than later.”

Khan has ignored Breidis Prescott ever since being flattened by the Colombian three years ago. Khan was able to ignore him because he was matched carefully after the Prescott loss, and has won every fight since then. Prescott was matched tough and lost two fights, although one of them against Kevin Mitchell was a questionable loss as far as I’m concerned.

I can’t see Khan going ahead and giving Prescott a rematch if and when he beats McCloskey on Saturday night in their fight in Ireland. I think Khan would take on the beaten McCloskey before getting back in the ring with Prescott one more time. There’s something about Prescott’s style that is all wrong for Khan, and I think he would knock him out no matter how many times Khan fought him.

Khan won’t fight him though because he doesn’t want to risk getting knocked out, and missing his chance for the biggest payday of his career against Floyd Mayweather Jr. The Mayweather fight is really the only big fight that Khan can get because he can’t fight Manny Pacquiao because they’re close friends. The other top fighters like Victor Ortiz, Saul Alvarez, Antonio Margarito and Miguel Cotto aren’t the type that would bring in huge money for Khan like a Mayweather fight would. This is why Khan won’t take a risky fight against Prescott or any of the other big punchers such as Lucas Matthysse, Marcos Maidana, or Mike Alvarado right now. Khan wants that big payday against Mayweather, and he’s not going to blow it by getting knocked out.

I don’t believe for a second that Khan will fight Prescott in the future if Prescott destroys McCloskey. Khan will likely just ignore him, move up in weight and use that as excuse not to fight him.