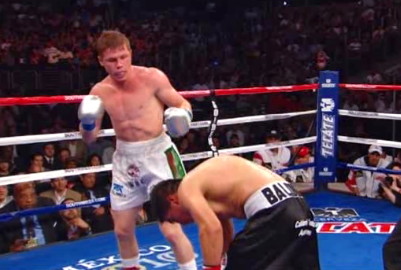 By John F. McKenna (McJack): In the recent Saul Alvarez media day at Big Bear Lake, California “Canelo” took time out from training to field questions from reporters at his training camp. Saul Alvarez (37-0-1, 27 KO’s) is training at Big Bear for his upcoming fight with Alfonso Gomez (23-4-1, 12 KO’s) on September 17 at the Staples Center in Los Angeles.

Alvarez will be defending his WBC 154 pound title. The fight will be part of a split site pay per view (PPV) event headed by the Floyd Mayweather – Victor Ortiz fight in Las Vegas.

“Canelo” demonstrated that he is comfortable in a media environment as he calmly and patiently held court before a group of perhaps fifty reporters. None of the reporters however wanted to ask him any questions about his upcoming fight with Gomez. Instead the questions directed at the youthful Mexican redhead were about possible future opponents.

More to the point reporters wanted to know when Alvarez will be facing someone who will give him a legitimate challenge. The same names are repeatedly brought up, as is the suggestion that he is just the product of media hype by Golden Boy Promotions who recognize that they have a potential cash cow on their hands and want to protect him.

As reported in The Ring Alvarez had this to say: “Let me be honest, I believe that I am ready for everyone. I’ll fight whoever my promoter puts in front of me. I don’t worry about who’s out there. If they tell me my next opponent is the devil, I’ll fight him.

“My job is to be 100% prepared for whoever I fight, and that’s why I’m here in Big Bear. I know I have critics, but that’s part of the game. I can’t worry about them. I just have to do my job and that job is to get ready for my next opponent who is Gomez.”

The 30 year old Gomez is a gutsy fighter, best known for appearing in the first season of the TV series The Contender. Gomez scored a seventh round TKO over Arturo Gatti in 2007 and lost by fifth round stoppage to Miguel Cotto in 2008. Since the loss to Cotto, Gomez has won five in a row.

Promoters salivate at the prospect of a matchup between Saul Alvarez and the equally popular Julio Cesar Chavez Jr. Promoters will more than likely attempt to make that fight before a loss by either Alvarez or Chavez to another fighter.

« Robert Guerrero to have surgery on Tuesday to repair shoulder, out four months

Mayweather: It’s obvious Pacquiao don’t want to do it [take the test] »