Alvarez vs. Gomez & Chavez vs. Hearns: Soft match-making in September 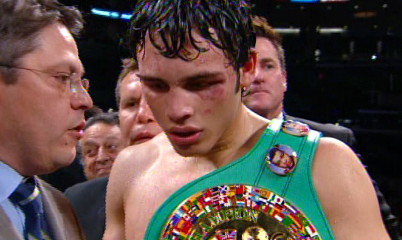 By Dan Ambrose: September will see a pair of mismatches by WBC champions Julio Cesar Chavez Jr. (43-0-1, 30 KO’s), the WBC middleweight champ, and Saul Alvarez (37-0-1, 27 KO’s), the WBC junior middleweight title holder. Both Chavez and Alvarez are hugely popular in their native country of Mexico, and it doesn’t seem to matter that neither of them has ever fought anyone even slightly dangerous.

At this point both fighters could be considered paper champions. Alvarez will be making his 2nd defense of his World Boxing Council title on September 17th against WBC ranked #7 challenger Alfonso Gomez (23-4-2, 12 KO’s) at the Staples Center in Los Angeles, California. Chavez, 25, is taking an ill-advised fight against fringe contender Ronald Hearns (26-2, 20 KO’s) also on September 17th at the Palenque, Cuilacan, Sinaloa, Mexico.

Chavez’s promoter and trainer are against him taking this fight because his trainer Freddie Roach won’t be available for much of the training camp, as he’ll be busy training Manny Pacquiao for his fight against Juan Manuel Marquez on November 12th. Chavez Jr. already has a fight scheduled in November against #5 ranked WBC contender Peter Manfredo Jr. That’s only two months away from the Hearns fight, leaving Chavez with little time to recover from any potential cuts or injuries he may sustain in the Hearns fight.

To be sure, neither Hearns or Manfredo Jr. are opponents that Chavez Jr. has to really worry about. Both are kind of lower fringe type fighters, but who the WBC for some reason has decided to rank very high. Whatever. It makes things easier for Chavez Jr. but it doesn’t save him from the eventual reality that he’s going to be forced to take on a live body in the future. He probably won’t be ready for that when it does come, because Chavez Jr. still looks very mediocre. Chavez Jr. may be forced to fight WBC Emeritus champion Sergio Martinez next year and that’s a guaranteed loss for Chavez. You can expect Chavez Jr. to either vacate the WBC title or have them strip it from him rather than taking on Martinez and getting dismantled by him.

Alvarez’s fight with Gomez is a little bit better than Chavez’s mismatch with Hearns, but not much. Gomez is ranked #7 by the WBC but it’s hard to see what he’s ever done to deserve that ranking. He’s fought at welterweight his entire career and only beaten an old guy Jose Luis Castillo and Jesus Soto Karass, but that’s about it. I see him as a bottom 20 contender, not someone that should be ranked in the top 10. But it clearly helps Alvarez by allowing his promoters to pick out a soft target for him to get another easy win.

Gomez doesn’t have the power or the speed to compete with Alvarez, and this is going to be a terrible mismatch. Like Chavez, Alvarez is going to have to face a harsh reality soon when he’s forced to defend his title against the winner of the Alfredo Angulo vs. Vanes Martirosyan bout. By facing weak opposition leading up to fighting the winner of that fight, Alvarez isn’t being prepared for what he’s going to be facing against one of them.

Audley Harrison: If Fury fights Coleman Barrett next, then you know they have no confidence in him »