Saul Alvarez vs. Alfonso Gomez to be shown with Mayweather-Ortiz on September 17th 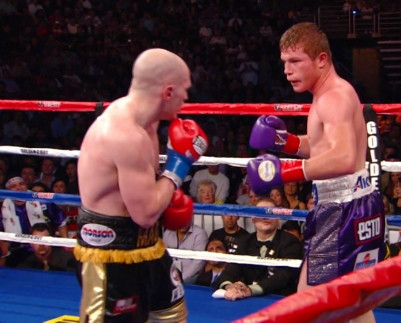 By Dan Ambrose: It’s official! World Boxing Council (WBC) junior middleweight champion Saul Alvarez (37-0-1, 27 KO’s) will be making his second defense of his title against the No.6 ranked WBC contender Alfonso Gomez (23-4-2, 12 KO’s) in what should be a huge mismatch on September 17th at the Staples Center in Los Angeles, California. This fight will be part of a split site HBO telecast with Floyd Mayweather Jr. facing WBC welterweight champion Victor Ortiz at the MGM Grand, in Las Vegas, Nevada, as the other fight to be shown.

The funny thing about the Gomez-Alvarez fight is that Gomez recently wasn’t even ranked in the top 15 when talks first started about Alvarez-Gomez, but if you look at the rankings today, Gomez is suddenly at number #6, ranked above fighters that I consider, much, much better than him such as Erislandy Lara, Pawel Wolak and Yudel Jhonson. I don’t think Gomez belongs anywhere close to the top 10 in the junior middleweight division because his best wins of his career have come against older, smaller fighters like Ben Tackie and Jose Luis Castillo. His win over Jesus Soto Karass left a lot of questions because Karass was coming on at the time of the stoppage. Gomez was cut from a head butt in the 6th, which caused it to go to the cards.

It looks like Alvarez’s handlers want to take things nice and slow with him and not put him in with anyone really dangerous that might beat him. They could have found a lower ranked guy that would give him a better fight, but Gomez is arguably better known in the Los Angeles area compared to lower ranked but more dangerous opponents like Lara, Wolak, and Jhonson.

Even if Alvarez were to have a bad night, I still see him destroying the weaker, slower, less skilled Gomez in four or five rounds. This is a mismatch. Gomez is a fighter that struggles with fringe welterweight contenders like Karass. He will way over his head against Alvarez.

Alvarez’s promoters are putting his fight against the over-matched Gomez with Mayweather-Ortiz to give Alvarez more attention in the U.S where he’s still mostly an unknown. By matching him against a guy that will get blown out, it will give the appearance that Alvarez is better than he is. It’s too bad they couldn’t put him in with someone that could actually give him a fight instead of someone that is just going to get blown out.

« Mayweather would love to fight Khan at Wembley

Prediction: Khan to be brutally knocked out by Judah tonight and exposed »