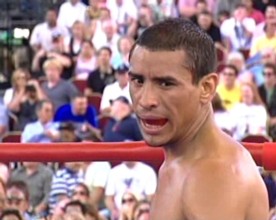 By Jason Kim: No.2 ranked WBC contender Rafael Marquez (40-6, 36 KO’s) will be taking on World Boxing Council super bantamweight champion Toshiaki Nishioka (38-4-3, 24 KO’s) on October 1st at the MGM Grand in Las Vegas, Nevada. The undercard of the fight has yet to take shape, but this is an interesting fight to see how much Marquez has left in the tank. The winner of this fight supposedly will be facing WBA featherweight champion Chris John.

Marquez looked horrible in his last fight, winning by a 6th round stoppage win over Eduardo Becerril on July 16th. Marquez’s hand speed seems to have taken hit, as he’s slowed down in the last couple of years. He was beaten by WBO featherweight champion Juan Manuel Lopez by a 9th round stoppage last year in November. Granted, Marquez was facing one of the best fighters in the featherweight division in Lopez, but Marquez was wearing down in the 2nd half of the fight and came up a sudden injury that may have saved him from being knocked out by Lopez.

Marquez has got his work cut out for him against Nishioka, because this guy is very good and fighting on a high level despite being just a year younger than Marquez. This difference here is that Nishioka hasn’t gone through three wars with Israel Vazquez the way that Marquez did. Those wars took a lot of out of Marquez and he’s not the same fighter he was before them.

Marquez will have a big power advantage over Nishioka, but it won’t mean anything if he can’t fight hard for 12 rounds and throw enough punches to win. Nishioka has a good chin and it’s going to take a furious assault from Marquez to get a stoppage. I’m not sure he has the stamina to do this without gassing out.

« Wach: After sparring with Povetkin I believe I’ll be heavyweight champion of the world

Alvarez vs. Gomez: Alfonso should make it interesting for a few rounds »