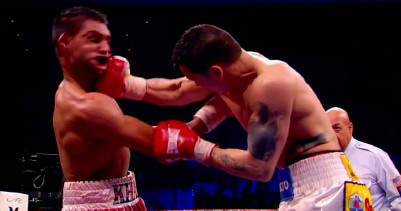 I don’t like Khan’s chances against either Mayweather or Ortiz, but I like even less the idea of an upstart like Khan getting a fight against the winner of Mayweather vs. Ortiz without facing and beating at least one excellent welterweight before. I say if Khan wants to fight the Mayweather-Ortiz winner than let Khan prove that he belongs in that spot by taking on and beating Andre Berto.

If Khan can beat Berto, then by all means let Khan face the winner of the Mayweather-Ortiz fight. But for Khan to go from facing Judah to possibly Mayweather is more than a little off putting to me. I don’t see Khan beating Judah but also don’t feel that a win over Judah shouldn’t put Khan into a big mega fight as Mayweather’s next victim. I doubt seriously that Golden Boy Promotions, the promoters for Khan, would be willing to risk his neck against Berto. As hard as Berto punches, he would very likely knock Khan out within one or two rounds. Berto has excellent power and speed to boot. He’s be a big problem for Khan.

I say let Khan fight Berto before he can get a shot at the big boys. HBO needs to make sure that Khan has to work for the right to fight Mayweather instead of facing Judah and getting a title shot. None of this really matters, though, because I see Judah destroying Khan and being the one that is a possibility to face the Mayweather-Ortiz.