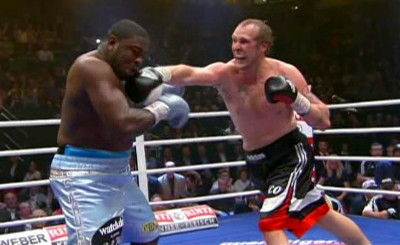 It would have been nice to see Haye against at least one good heavyweight contender, such as unbeaten 6’6” Robert Helenius (15-0, 10 KO’s). Earlier tonight, Helenius destroyed former WBC heavyweight champion Samuel Peter in a 9th round KO at the Gerry Weber Stadium in Halle, Germany. Helenius, using a thudding jab and a short left hook, blasted Peter to the canvas in the 9th. When Peter got to his feet, Helenius tagged him with a long right hand followed by a powerful short left hook that knocked Peter flat on his back on the canvas.

The fight was then halted at 1:50 with Peter on his back and looking badly hurt. Helenius has got to be considered as the top fighters in the heavyweight division right now. Because of his huge 6’6” size and his tendency to fight tall and retreat when attacked, he’s very hard to hit. Peter attempted to land a lot of right hands and left hooks but because of Helenius’ height, he was able to lean away from Peter to make his shots miss.

Helenius seems to have done a good job of coping Wladimir’s short left hook and his way of backing away when attacked. He also ties up his opponents when they get in close like Wladimir. Helenius doesn’t have Wladimir’s hand speed nor his crushing power in both hands. However, he’s still a very hard puncher and his size makes him hard to hit consistently. Helenius showed a really good chin in the Peter fight, as he took some of his best shots without showing any signs of being hurt.

If Haye had to fight Helenius to get to the Klitschkos, I don’t think Haye would have made it. Helenius is no joke. He’s like a slightly weaker version of Wladimir and he does a lot of things better than Wladimir. I don’t think Haye would do well at all against this guy. In order to get a shot against Wladimir all Haye had to do was beat the following heavyweights: Monte Barrett, 38, Nikolay Valuev, 36, John Ruiz, 38, and Audley Harrison, 39. It’s too bad Haye didn’t have to fight a younger guy like Helenius to get his shot against one of the Klitschkos.