Pavlik vs. Lopez on Pacquiao-Mosley undercard on 5/7, Froch a future possibilty for Kelly 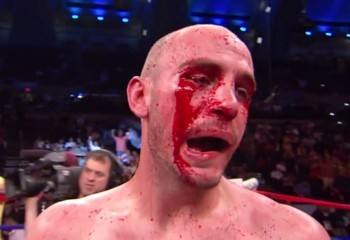 By William Mackay: Barring any injuries or setbacks with his alcohol rehab, a rusty former WBC/WBO middleweight champion Kelly Pavlik (36-2, 32 KO’s) will be returning to the ring on May 7th to face little known Alphonso Lopez (21-0, 16 KO’s) on the undercard of the Manny Pacquiao vs. Shane Mosley bout at the MGM Grand, in Las Vegas, Nevada. Pavlik hasn’t fought since last year in April, losing his title by a 12 round decision to Sergio Martinez.

After serving a stint in the Betty Ford clinic to take care of an alcohol problem, Pavlik is ready to get back in the ring and resume his boxing career. He’s now moving up in weight to the super middleweight division where he’s currently the #1 contender to WBC super middleweight champion Carl Froch. The chances of Pavlik facing Froch are pretty slim, however, because Froch still has two fights ahead of him in the Super Six tournament and must win both in order to retain his WBC belt. If he loses his next bout against Glen Johnson in May, Froch will be eliminated from the tourney.

Pavlik will have no problems beating Lopez because the guy hasn’t faced anyone in Pavlik’s class before and he’s been well researched. But once Pavlik gets beyond the 2nd tier fodder, he’s going to have problems unless he fixes his flawed style of fighting. Pavlik needs to learn how to move his head and cut off the ring on movers. At super middleweight, Pavlik will be potentially facing some slick fighters like Andre Ward, Bute and Andre Dirrell. Those are fighters that Pavlik will have problems with unless he adapts.

« Bute to roll over Magee this Saturday night on Showtime

Lemieux vs. Rubio in WBC eliminator on 4/8 »