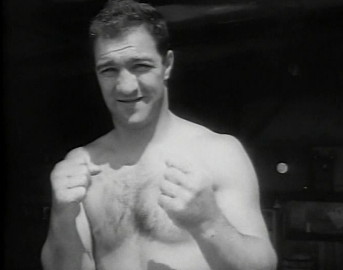 By John F. McKenna (McJack): Nobody could figure the best way to handle Rocky’s power, his constant, unrelenting pressure and his ability to take a punch. Marciano, as all great champions do, had supreme confidence in himself and an indomitable will. He said frequently that “In my prime I could have beaten anyone alive.” Rocky also was quoted as saying “Why waltz with a guy all night when you can take him out in one?” After his retirement Rocky said that “Barring poverty, you have seen the last of me in the ring.” Rocky retired with a 49-0, 43 KO record. No other Heavyweight Champion in history retired undefeated. To Marciano’s credit, he stayed retired, despite lucrative offers by promoters to get him to return to the ring. In an era when the Mob had a huge influence in the ring, Rocky was “untouchable”. He had a squeaky clean image and even the Mob bosses respected that. The Mob bosses sent out the word to leave Rocky alone.

Rocky never trusted anyone with his money. He did not trust lawyers, accountants or banks. He reportedly hid large sums of money in the strangest of places, much as an alcoholic hides bottles around the house. Part of Rocky’s paranoia about money was because he had seen numerous fighters go broke after their retirement, including his boyhood idol Joe Louis. In another instance he reportedly encountered the former great Lightweight Champion of the 1940’s, Beau Jack in Miami shining shoes to eke out a living. Rocky also suspected that his manager Al Weill was skimming some of his earnings. He was determined that he would not wind up like so many other fighters, broke and impoverished, forcing their return to the ring.

Rocky was very conservative when it came to earning and spending money. When making a ring appearance after his retirement, he always made sure he would be paid. He also made many appearances at sports dinners and functions. He insisted on being paid in cash and would back out of the event if he was not guaranteed to be paid in cash only.
Rocky loaned large amounts of money to various people after his retirement from the ring. No contracts were ever signed. Sometimes he got paid and other times he did not.

As frugal as Rocky was, he was generous with family and close friends. He also had special affinity for ex fighters, such as Ezzard Charles, Jersey Joe Walcott and Joe Louis. Marciano had a lot of contacts and would arrange speaking engagements for his boxer buddies in which they would get paid. He acted as if it was his responsibility to help them in any way he could.

Rocky Marciano was killed in 1969, on the eve of his forty sixth birthday. He was on his way to make a speaking engagement in Des Moines, Iowa. His legacy and legend as one of the greatest Heavyweight Champions of all time is unquestioned. He was an extremely complex man and while he was the Champ he was fond of saying “What could be better than walking down any street in any city knowing that you’re the Heavyweight Champion of the World?”

As to the primary reason that Rocky retired on top he said “ I don’t want to be remembered as a beaten champ.”

Rocky Marciano achieved his goal of going out on top.