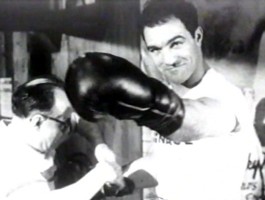 By John F. McKenna (McJack): Trainer Charley Goldman went to work developing the technique which would serve Rocky so well and ultimately make him Heavyweight Champion of the World. On December 19, 1949 Rocky fought his first name opponent, Phil Muscato, an experienced heavyweight from Buffalo, New York. Rocky KO’d Muscato in the 5th round. Three weeks later Marciano KO’d Carmine Vingo also in the 5th round. Vingo nearly died as a result of a brain hemorrhage he suffered in the fight. He teetered between life and death for three days before finally coming out of a coma. Rocky later said it was his most difficult time as a fighter. Viingo eventually did recover, but he never fought again.

In late March of 1950 Rocky won a very close decision over Roland La Starza in ten rounds. La Starza would again fight Marciano in 1953, this time for Rocky’s title. On July 12, 1951 Marciano was showcased on national television for the first time when he faced heavyweight contender Rex Layne, who he KO’d in the 6th round. Rocky’s next opponent was a badly faded Joe Louis who had made an ill advised comeback after retiring in 1949. Rocky KO’d Louis, who had been his childhood idol, in the 8th round. Marciano wept in Joe Louis’s dressing room after the fight. Louis consoled him and told Rocky that he would go on to become a great champion in his own right. Rocky was aware of Louis’s financial problems and was determined that what had happened to the great Joe Louis and many other fighters would not happen to him. After four more fights Rocky challenged Jersey Joe Walcott for the Heavyweight Championship of the World on September 23, 1952 in Philadelphia, PA. In what was to be a ring classic, Walcott knocked Marciano down in the first round and built up a points lead as the fight progressed. Rocky’s constant pressure eventually wore down the thirty eight year old champion and Rocky KO’d Walcott in the 13th round with a devastating right hand to the jaw. The power Rocky had, particularly in his right hand shots, was beginning to achieve legendary status. Boxing writers nicknamed Marciano’s famed right hand his “Suzie Q”. The right cross that Marciano KO’d Walcott with is arguably the best right cross in Heavyweight Championship history (You Tube – Marciano vs Walcott). The still photograph of the punch, frozen in time at the moment of impact, is also quite possibly the most famous boxing photograph ever taken.