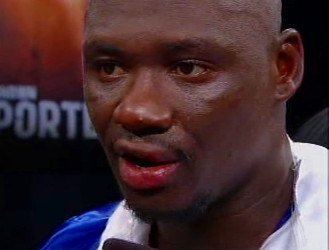 By Eric Thomas: The heavyweight division just got a new shot in the arm with the addition of former IBF/WBA/WBC light heavyweight champion Antonio Tarver (28-6, 19 KO’s), who moved up to the heavyweight division on Friday night and easily defeated the hard hitting Nagy Aguilera (16-5, 11 KO’s) by a 10 round unanimous decision at the Buffalo Run Casino, in Miami, Oklahoma. Showing excellent hand speed, good power and brilliant defense skills, the 41-year-old Tarver pounded out a lopsided 10 round decision by the scores of 98-92, 98-92 and 98-92.

Forget about Tarver’s age. He looks and fights like someone at least 10 years younger than that. While he didn’t get the knockout, that’s more of an indication of how good Aguilera’s chin was rather than a sign that Tarver wasn’t punching hard. He was throwing really hard shots and looked a lot stronger than he used to be while fighting as a slender light heavyweight. As good as Tarver looked, he probably should have moved up to the heavyweight division a long time ago because he has the frame, the movement and the boxing ability to do well at this weight.

Of course, I don’t think the 6’3″ Tarver could compete with either of the Klitschko brothers, because he doesn’t have that kind of power or size. But I think Tarver is good enough to beat WBA heavyweight champion David Haye. I think he beats him, because Tarver is a lot quicker on his feet and better defensively than Haye. Right now, I think Tarver might be the better than all the other heavyweight contenders in the division, including Tomasz Adamek, Denis Boytsov, Alexander Povetkin and Odlanier Solis.

Tarver appears to punch just as hard as them, but is much faster and better skilled defensively. I originally thought Tarver wouldn’t be a factor when I first heard about him moving up in weight and skipping the cruiserweight division. However, Tarver looked really good in beating Aguilera. That was a really bad mismatch because Tarver was too fast for him and basically punishment him for the entire fight. I think Tarver looks a lot better than Adamek, another former light heavyweight that has moved up to the heavyweight division and has found success against carefully chosen opponents.

My guess is Tarver would badly punish Adamek if they were to mix it up. Adamek doesn’t react well when he gets hit, and his face cuts up and swells if he’s even hit a little. Tarver would be hitting him a lot and I can’t see Adamek being able to take that kind of punishment withou getting stopped.

Would Haye have been able to take the kind of punishment that Briggs did against Vitali? »