Briggs vs. Klitschko: Vitali’s body is willing but his flesh is weak 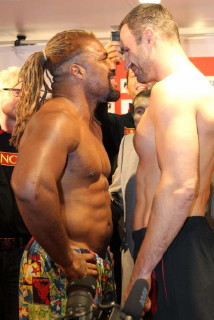 By Dave Lahr: Former World Boxing Organization (WBO) heavyweight champion Shannon Briggs (51-5-1, 45 KO’s) is poised to win another world title tonight when he faces WBC heavyweight champion Vitali Klitschko (40-2, 38 KO’s) at the O2 World Arena, in Hamburg, Germany. It’s been four years since the 38-year-old Briggs last won a world title when he took out a then young Sergei Liakhovich in the 12th round with only one second left in the fight. Briggs is now ready to win another title and this time against the 39-year-old Vitali. Briggs is a huge underdog in this fight, but people are forgetting how hard Briggs hits and how weak Vitali’s facial skin is around his eyes.

Vitali was ripped to shreds in his fight with Lennox Lewis in 2003. In that fight, Vitali was cut badly around both eyes and had his mouth ripped open like a fish who had a hook ripped from its mouth. Vitali has been able to succeed since the Lewis fight largely because his opposition has been much shorter than him and hasn’t had the power or the speed to land their shots. The 6’4” Briggs has everything that is required to land his shots and rip Vitali to pieces tonight. Blessed with size, hand speed and incredible power, Briggs has been knocking out all of his opponents in the 1st round since making a comeback in 2009.

Although I don’t expect Briggs to knock Klitschko out in the 1st round tonight, I do see him tearing Vitali’s skin badly around both eyes and getting a cut stoppage around the 6th to 8th rounds. The referee working the fight from Britain will have to make a decision about when to pull the plug on the fight.

On the one hand, he’s going to have a huge arena full of angry German boxing fans that will be showing their anger by screaming at him if he stops it, but on the other hand he can’t let the fight go too long with Vitali bleeding all over the place with terrible cuts over his eyes. Briggs has too much power, and Vitali’s skin is too tender. It’s the kind of skin that should be on a babies bottom, not on the face of a world champion heavyweight boxer. I see this going badly for Vitali. I think he’s going to need a quick trip to see a plastic surgeon to repair his cuts after the fight is stopped.