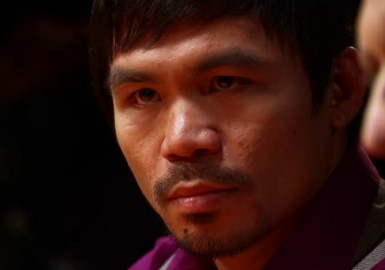 By Juan dela Cruz, Baguio City, Philippines – Bob Arum, Top Rank Big Boss warned Manny Pacquiao not to underestimate Margarito’s determination to win this fight. Arum himself gave this warning to Pacquiao at his training camp here in the Summer Capital of the Philippines, Baguio City.

Bob Arum arrived yesterday in Manila and went directly to Baguio to witness the preparation being made by the Pacman for his November 13 WBC junior middleweight fight at Cowboy’s Stadium in Dallas, Texas against the Tijuana Tornado. On Monday, October 18 will be media day where Pacman will show the people that he is serious in his training and let them know in what level he is now as far as preparation is concerned.

According to Arum, Margarito poses very unique danger and that the Tijuana Tornado is in tremendous shape with a little over a month left. Margarito already stated that he will defeat Manny and resurrect his damaged reputation as a boxer when he figured in a hand wrap controversy in his fight against Shane Mosley on January 24, 2009 where he was meted one year suspension from the sport.

Arum further warned Pacman that this what makes Margarito too dangerous because he has a mission and anyone who has it will do everything to accomplish his task even if he needs to punish himself with rigorous training. He would be dangerous for any welterweight in the world. And while Margarito is fully concentrated in his training, meanwhile, Pacquiao’s preparation was clouded with controversies because of some activities not needed in his training, which include going down to Manila every weekend, playing basketball and other activities he attended in his capacity as Congressman of lone district of Saranggani Province which put doubt in the minds of many if Pacman will be able to win this fight.

Manny and Margarito will be fighting for the vacant WBC junior middleweight belt and Arum is still confident that the 7-time world division champion will take home the belt. Arum was also optimistic that more than 51,000 boxing fans will watch the fight which, for the second time, will be staged at Dallas Cowboy’s Stadium in Texas. His first fight against Joshua Clottey had a record of 50,000 watchers. “Because of Margarito, we’re reaching out more to the Hispanic community than we did last time because we didn’t have Hispanic in the main event. We’re very, very bullish about the buzz that’s taking place over in Texas. We know we’re going to do more than 51,000 we did before. How much more? We’ll see”, according to Arum

« Briggs vs. Klitschko: Vitali’s body is willing but his flesh is weak