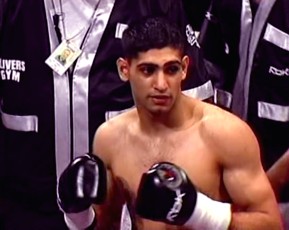 By William Mackay: WBA light welterweight champion Amir Khan (23-1, 17 KO’s) was at ringside last night to watch World Boxing Association/WBO lightweight champion Juan Manuel Marquez (51-5-1, 37 KO’s) defeat Juan Diaz (35-1, 17 KO’s) by a lopsided 12 round unanimous decision on Saturday night at the Mandalay Bay Resort and Casino, in Las Vegas, Nevada. Instead of being scared away from wanting to fight Marquez, Khan is even more eager to get the smaller and older Marquez in the ring with him at light welterweight rather than lightweight. In an article by Gareth A Davies at the Telegraph, Khan says “Marquez looked strong and sharp. I still want to fight him. He’s a legend. I know people think I’m stupid to fight someone with so much experience, but I want tough fights against big names. I am now relying on Golden Boy Promotions to make this fight for December.”

Marquez has been a featherweight for almost his entire career and only recently moved up to lightweight. Now, Khan wants Marquez to move up to light welterweight to fight him at 140 instead of moving down to fight him. Khan hasn’t even made a name for himself, and yet he wants Marquez to fight him? If Marquez does take this fight, he would be doing Golden Boy Promotions and Khan a huge favor by helping his career with this fight.

Khan hasn’t fought anyone yet, aside from Paulie Malignaggi, and really needs to take on at least one of the top fighters in the division before trying to go after a smaller fighter like Marquez. I’m not sure if Khan is really worthy of a fight with Marquez at this point. Sure, he fought in the Olympics in 2004, but he was a Silver Medalist, not a Gold Medal winner. And in the pros, Khan was knocked out in the 1st round by the Breidis Prescott, the only big puncher Khan has been put in with during his career. He’s been matched selectively since then and kept away from big punchers like Prescott.

Ideally, Khan should fight Maidana or Bradley, and if he beats them, then I can understand Khan going after someone like Marquez. But without having proven that he’s the best fighter in the light welterweight division, it would seem odd for Khan, at this point in his career, to be looking to fight a smaller lightweight rather than someone in his own weight class. That’s like putting the cart before the horse.

« “The Battle of York 5” undercard results